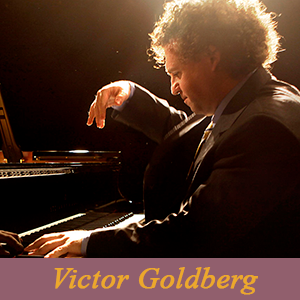 “Victor Goldberg is an excellent pianist with a formidable technique, a powerful and a romantic soul…[his] intensely expressive performance had a powerful emotional impact.”  Edith Eisler, New York Concert Review.

He has been hailed as a performer with “astute interpretive sensibilities” by Allan Kozinn of The New York Times, and has received praise from The Washington Post for his “emotionally frank style” and “technique to burn.”

Victor Goldberg is a strikingly original yet highly sensitive and imaginative pianist.  He is a master of focused emotion whose commanding stage presence has won him a major following worldwide.   His dramatic program will include Scarlatti, Chopin, and Mussorgsky.

Refreshments will be served.

TICKETS are $15 in advance, $18 at the door, $25 Series, and $5 student, and may be purchased at the Dunaway Center, Ogunquit Camera Shop, Ogunquit Welcome Center, and Arts Ogunquit Building.

Victor Goldberg has performed in such prestigious venues as Carnegie Hall, Lincoln Center,  the National Gallery of Art in Washington, DC,  the Wiener Konzerthaus in Vienna, the Dame Myra Hess Series in Chicago, the Dvorak Hall of the Rudolfinum in Prague, the Oriental Arts Center in Shanghai, and Musashino Hall and Toppan Hall in Tokyo.

He has been recognized with numerous awards, including the Pro Musicis International Award, and the Artist Recognition Award at the International Keyboard Festival, New York.   The Israel Ministry of Foreign Affairs has declared Victor Goldberg an “Israel Cultural Ambassador,” resulting in numerous collaborations with embassies world-wide.

Goldberg also has performed charitable concerts in such distant locations as Yangon and Mandalay. His charity concert at a Buddhist orphanage  allowed him to share his emotional connection to and appreciation of music to 6000 childen who had never had an opportunity to hear a live classical music performance.  This occasion prompted Dr. Goldberg to co-found  the Key Vive Arts Foundation, a non-profit organization dedicated to promoting charitable causes by using the power of music to enrich the human spirit and bring people closer to one another.  He currently serves as Artistic Director.