Price $15 advance, $18 at door, $5 students
Joyce Andersen and Harvey Reid return to Ogunquit Performing Arts, bringing with them the Knotty Pine Boys All-Star Band to take you on a musical tour of classic American country and folk favorites. 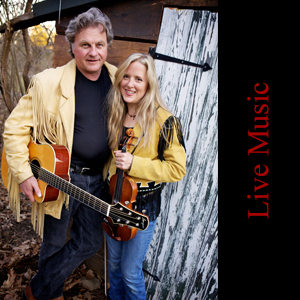 Joyce Andersen and Harvey Reid return to Ogunquit Performing Arts, bringing with them the Knotty Pine Boys All-Star Band to take you on a musical tour of classic American country and folk favorites.

For this performance, they are joined by members of the Knotty Pine Boys playng Steel Guitar, Bass, and Drums, a recent combination which has packed in the crowds in local venues.

Join us for this rousing evening of family fun and lively, dynamic music!

Harvey Reid & Joyce Andersen’s love for classic country music found an outlet when they got together with the Knotty Pine Boys, a collection of all-star seacoast side-men. Harvey was raised in the south and cut his teeth on the golden oldies of country music and Joyce’s first fiddlin’ gig was with Boston’s late country legend John Lincoln Wright and the Sour Mash Boys which then led her to a year playing country music out of Nashville TN, riding a tour bus and wearing a cowboy hat. When they get together for a rare Knotty Pine Boys show their love for the music is infectious.

They don their western clothing and play hits from the golden era of country music. Songs from Merl Haggard, Patsy Cline, George Jones, Tammy Wynette, Hank Williams, Dolly Parton and the like. With their sweet vocal harmonies backed by soaring pedal steel, spare drums, bass, and rockin’ fiddle, it’s always refreshing to step back in time and spend an evening with this band.

If you don’t know Harvey Reid & Joyce Andersen’s music you can ramble around their websites (Joyscream Music & Woodpecker Records) or find them out there on iTunes and the like. They are life long musicians with deeps roots in a wide range of American music. Between the two of them they’ve made over 30 albums ranging from folk & blues to country & Americana and jazz & bluegrass. They have traveled the country and the world playing their original takes on American music as well as their own songs.

Songwriter, multi-instrumentalist and music educator Harvey Reid has honed his craft over the last 40 years in countless clubs, festivals, streetcorners, cafes, schools and concert halls across the nation. He has been called a “giant of the steel strings” and “one of the true treaures of American acoustic music,” and is considered to be one of the modern masters and innovators of the acoustic guitar, autoharp and 6-string banjo. He has absorbed a vast repertoire of American contemporary and roots music and woven it into his own colorful, personal and distinctive style. His 32 recordings on Woodpecker Records showcase his mastery of many instruments and styles of acoustic music, from hip folk to slashing slide guitar blues to bluegrass, old-time, Celtic, ragtime, and even classical.

Joyce Andersen is a veteran musician who has enjoyed a varied 20 year career as side-gal, session player, singer-songwriter, and band leader. Her live shows and recordings showcase her versatility as a vocalist and violinist who thrives on writing and interpreting songs across many genres from old-time, rock & Americana, to folk, pop, & swing. She started getting critical acclaim and radio play in the folk world with her first full length CD “The Girl I Left Behind” (2000) for it’s songwriting, breadth of styles and her unique ability to harmonize her vocals with her violin. Her latest CD “SWERVE!” (Oct. 2011), marks the invention of her innovative new “violin troubadour” sound which reflects her strengths as an improviser, and her new found interest in using technology (loops, effects etc.) to harness new sonic landscapes and launch into extended psychedelic jams.