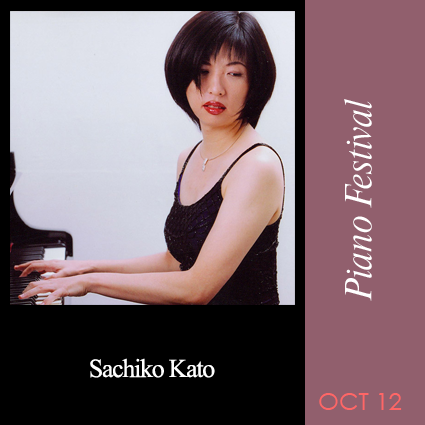 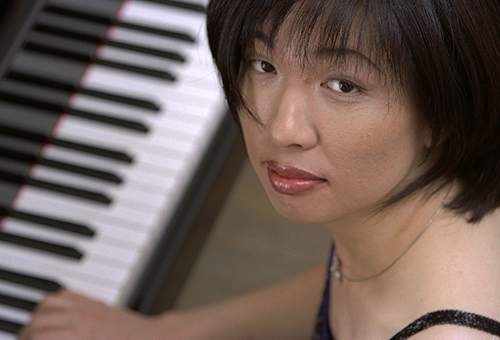 Sachiko Kato, known for her expressive and gorgeous tone, is a classical pianist whose interest ranges from Bach to the contemporary. She has performed throughout the United States and her native Japan, as well as in Canada and Brazil. Her current projects include a recording of the Brahms’s late piano works released in early 2017.

Ms. Kato has previously recorded the Goldberg Variations on the Centaur Records label in 2012. Jerry Dubins of Fanfare claims “Sachiko Kato’s performance is truly special” and “… everyone who embraces Bach’s Goldberg Variations on piano, this deserves to be heard and is urgently recommended.” Her playing has been broadcasted by New York’s public radio station WNYC on its “New Sounds” program, as well as New York’s classical station WQXR, KMZT (Los Angeles) and WKCR FM (Columbia University station, New York). Sachiko’s performances have received critical acclaim: “the velvet smoothness and silken beauty … an extremely imaginative player … she plays with such a sense of effortlessness and ease” (Fanfare Jan.-Feb. 2013); “a lovely, delicate touch … interpretive clarity … impressively crisp fingerwork and consistent energy.” (New York Concert Review). Ms. Kato was also featured in the Juilliard centenary publication, “Dance Drama Music: 100 Years of the Juilliard School,” as one of the 100 outstanding alumni.

A champion of new music, Ms. Kato has commissioned, premiered, and recorded contemporary works. She founded Weaving Japanese Sounds, contemporary Japanese music concert project in 2004 in the hopes of facilitating cultural exchanges between the US and Japan by introducing Japanese new music to American audiences in an accessible manner. The concerts are presented annually with a coterie of top-tier musicians and have been garnering critical acclaim and enthusiastic followers.

Ms. Kato has won numerous competitions such as the Frinna Awerbuch International Piano Competition and the Pro-Piano Recital Series Auditions, both held in New York. After her debut at Carnegie Weill Hall in 1995, she has performed extensively throughout the world. She has been heard at the Lincoln Center Alice Tully Hall and Performing Arts Library, Steinway Hall in New York, the Los Angeles County Museum, and the Arcady Music Festival in Maine. She has toured Canada and Brazil under the auspice of Japan Foundation, and performed an all-Japanese composers program in Algeria.

Sachiko Kato was born in Osaka, Japan and immigrated to Los Angles with her family at the age of 14. She graduated from California State University Northridge and then, on scholarship, completed her Master’s Degree at the Juilliard School. She did further studies in Boston with the famed pianist/teacher, Russell Sherman. Ms. Kato is based in New York City.