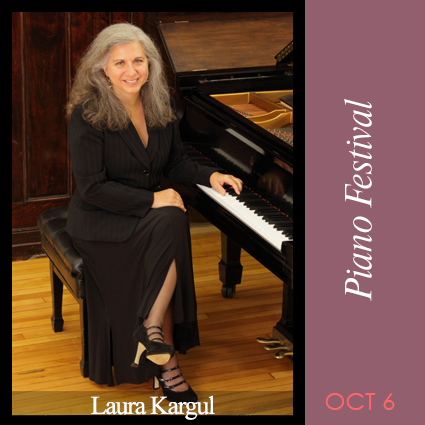 After receiving her doctorate in piano performance from the University of Michigan, Ms. Kargul began to concertize internationally.  Her European debut in the Netherlands in 1985 was hailed by the Rotterdams Nieuwsblad as “one of the most remarkable debut recitals recently given in our country.”  The following year she played at Amsterdam’s Concertgebouw and earned immediate recognition as “a world class pianist:  This is playing that belongs on our great concert stages … almost feverishly inspired, so controlled and so thrilling.”  Haagsche Courant, The Hague.

Subsequent tours have included solo concerts in Austria, Belgium, France, Germany, Greece, Switzerland and the West Indies.  As a guest of  numerous international music festivals, Ms. Kargul has appeared at the Schleswig-Holstein, Nordhessen, and Eisenacher Summer Music Festivals in Germany; the Evian Music Festival in France; the Opera Theater and Music Festival of Lucca in Italy; and the Lesvos Arts Festival in Greece.  She has recorded for radio in France, Germany, the Netherlands, and Jamaica, as well as for PBS radio and national television in the United States.

Although her repertoire spans from Scarlatti to Rochberg, Ms. Kargul has received particular recognition for her playing of the nineteenth century romantics.  She is one of the few pianists ever invited to give a full recital on Liszt’s own Bechstein piano at the Liszthaus in Weimar, Germany, and her performances of Liszt have consistently drawn high praise:  “Liszt wanted everything from the piano – wildness and fervor, exuberance and humility.  Laura Kargul delivers all of it.  She is completely absorbed by the music, elegantly floating through the most treacherous passages … “  Hessische Allgemeine, Kassel, Germany.  At the same time, critics frequently comment upon her unusual versatility and find her performances of works from all periods to be equally compelling.

Ms. Kargul moved to Maine in 1989 to join the piano faculty at the University of Southern Maine, where she now serves as the Director of Keyboard Studies.