Price $5
Returning to Ogunquit for their annual visit, this acclaimed school brings a troupe of more than a dozen dancers garbed in brilliant, sparkling costumes. Always a local favorite, the dancers perform an array of jigs and reels which have won them prizes at regional and international competitions. Their performance will be followed by an intermission with refreshments, and the screening of the dance film, “The Turning Point”. 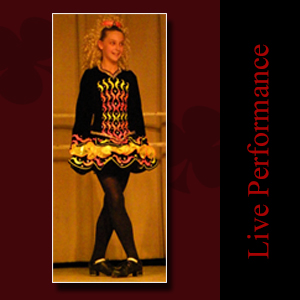 The Stillson School of Irish Dance has an active show team which has performed throughout New England as well as on the Elipse lawn of the White House. They have been featured dancers accompanying such renowned Celtic performers as SOLAS, CHERISH THE LADIES, TRINITY DANCE COMPANY, LIZ CARROLL, BILLY MCCOMISKEY and MICK MOLONEY, and EILEEN IVERS.

The Stillson School of Irish Dance is under the direction of Carlene Moran Stillson ADCRG / TCRG. She is accredited by An Coimisiun in Dublin, Ireland and a member of IDTANA. (Irish Dancing Teacher’s Association of North America) and The New England Region teaching organizations.

The Turning Point is a 1977 drama film centered on the world of ballet in New York City, written by Arthur Laurents and directed by Herbert Ross. The film stars Shirley MacLaine and Anne Bancroft, along with Leslie Browne, Mikhail Baryshnikov, and Tom Skerritt. The film was nominated for eleven Academy Awards, including Best Picture. The script is a fictionalized version of the real-life Brown family and the friendship between ballerinas Isabel Mirrow Brown and Nora Kaye. Isabel’s daughter Leslie Browne, who went on to become a principal dancer with New York’s American Ballet Theatre, portrays herself in the film.