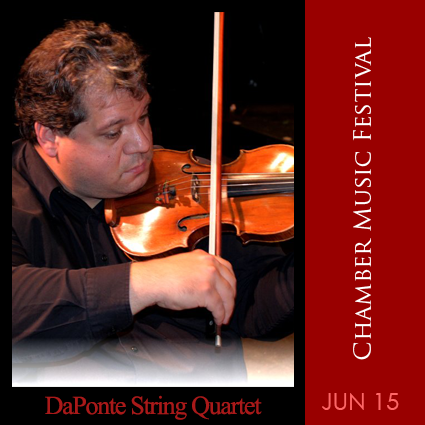 The DaPonte String Quartet returns to Ogunquit Performing Arts after too long an absence.  Their performances for OPA go back to almost the beginning of the Chamber Music Festival in the mid-90’s.  A return engagement is long overdue, and OPA together with the Barn Gallery are so happy to join together to welcome back the Quartet.

Ogunquit Performing Arts will celebrate its 40th Anniversary with a Champagne Reception following this performance.

The DaPonte Program will include:

Not long after forming in Philadelphia twenty-one years ago, the DaPonte String Quartet surprised the musical world by moving from a cosmopolitan urban area to rural Maine. The DSQ had been — and continues to be — sought after to perform and teach all over the U.S. and around the world. They have appeared in France, Scotland, Canada, and more than twenty American states. Their performances have been broadcast over nation-wide radio and television programs in both the United States and Canada. They have received awards from the National Endowment for the Arts, the Philadelphia Musical Fund Society, the Music Teachers National Association, Chamber Music America, and have participated in several of the nation’s most prestigious concert series to rave reviews. Musicians and critics alike wondered, why would the DSQ move to Maine, where, as the New York Times noted, they create an experience “like watching the Celtics play in the local gym.”

But the members of the DaPonte String Quartet were proud to call Maine home, and their relationship with mid-coast Maine remains a deeply rooted one.

A violinist and conductor, Dino comes from a musically prominent family in northeastern Pennsylvania. He began studying the violin at age seven with his father, a noted conductor and teacher. Dino continued his education at the Peabody Conservatory with Berl Senofsky. After graduating with a Bachelor of Music degree, he studied with Christine Dethier in New York and then attended Temple University, working with Luis Biava, where he graduated with a Master’s degree and a Professional Studies Certificate. He then spent four years as Assistant Professor of violin and chamber music at Wilkes University and as conductor of the University Orchestra.

In 1991, Dino became one of the founding members of the DaPonte String Quartet and he moved full-time to Maine in 1996. Chamber music has remained his passion since those first rehearsals at the home of cellist Myles Jordan. The DSQ’s performances and workshops have been praised by members of the press and the quartet has worked with many important contemporary musicians, including Marc Johnson, Anton Kuerti, Pamela Mia-Paul, Rami Solomonov, Tom Hill, Mark Simons, Jon Klibonoff, Maria Bachmann, Randall Hodgkinson, and Marcus Thompson. Dino also continued to conduct and teach when he moved to Maine, enriching the lives of young musicians throughout the Midcoast.

Lydia’s career has been guided by a singular intention — to delve as deeply as possible into the magic of great chamber music literature, old and new.

Lydia has concertized throughout Europe and the U.K. with Ensemble L’Archibudelli, Zephyr Kwartet, Het Schoenberg Ensemble, Sinfonietta Amsterdam, Het Blazers Ensemble, Osiris Piano Trio, I Fiamminghi, and Ensemble Explorations. During this time, she recorded with some of the world’s most prominent labels; Sony Classical, Harmonia Mundi, CNM, and for Vienna Modern Masters as soloist with the Czech Radio Philharmonic. She has also performed for festivals in Europe, the U.K., Australia, New Zealand, and the U.S. Lydia has also served as concertmaster for Het Orkest van het Oosten in the Netherlands.

Myles Jordan worked as a child actor for CBC Television and the National Film Board of Canada before taking up the cello. Inspired by the North American premiere of the second Shostakovich cello concerto and a Casals master class, Myles asked for and received from his father a bright orange Hofner cello as a birthday present. He went on to train at the Banff School of Fine Arts in Alberta, the Britten-Pears School of Advanced Musical Studies in England, and at Schloss Weikersheim in Germany. In 1981, he won a Floyd S. Chalmers Foundation Award, which enabled him to study at the Juilliard School, and by 1983 he had earned two degrees there. From New York he moved to Philadelphia, where he served as associate principal cellist of the Concerto Soloists Chamber Orchestra, completed a Doctor of Musical Arts, and founded the DaPonte String Quartet.

A native of Brunswick, Maine, Kirsten Monke received both her Masters and Bachelors degrees at Indiana University, where she worked with Kim Kashkashian and Georges Janzer (of the Vegh Quartet and Grumiaux Trio). As a graduate fellow at UC Santa Barbara, where she studied with Heiichiro Ohyama, she was a founding member of the Anacapa String Quartet, winners of the Fischoff competition as well as recipients of various honors from Chamber Music America. Following ten years of touring and concertizing with the ASQ, Kirsten remained in Santa Barbara, serving as Principal Violist of both the Santa Barbara Symphony and the Santa Barbara Chamber Orchestra. She also taught at the University of California, Santa Barbara, Westmont College, and at chamber music workshops across the country. Kirsten can be heard in recordings with the Anacapa Quartet and the Santa Barbara Symphony, as a soloist on a jazz CD featuring the music of Earl Stewart, and as a member of the Gove County String Quartet, a group that performs all original music.  Kirsten joined the DaPonte String Quartet in 2008.