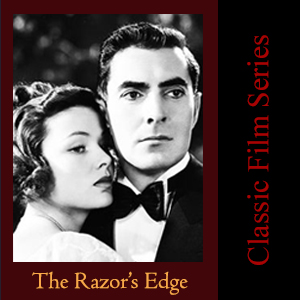 The Razor’s Edge is the first film version of W. Somerset Maugham’s 1944 novel. A Darryl F. Zanuck production, it was released in 1946 and stars Tyrone Power, Gene Tierney, John Payne, Anne Baxter, Clifton Webb, Herbert Marshall, supporting cast Lucile Watson, Frank Latimore and Elsa Lanchester. Marshall plays Somerset Maugham. The film was directed by Edmund Goulding. The book’s epigraph reads, “The sharp edge of a razor is difficult to pass over; thus the wise say the path to enlightenment is hard,” taken from a verse in the Katha-Upanishad.”

The Maugham best-seller, in which Maugham himself is a character in the story, is beautifully brought to life as a film classic, which questions society’s values. This intriguing tale centers on a soul-searching World War I veteran (Power) who finds he cannot settle back into the world of the upper class. Shunning his planned marriage and conventional career, he travels abroad to seek a more meaningful and enlightened life, and causes his distraught fiancee (Tierney) to seek solace with another man (Payne).

Maugham wrote the part of Isabel with his friend Gene Tierney in mind. Zanuck wanted Tyrone Power to star and delayed final casting until Power finished his service in the Marines in January 1946.

20th Century Fox had purchased the film rights from Maugham in March 1945 for $50,000 (equivalent to approximately $654,991) plus 20% of the film’s net profits. The contract stipulated that Maugham would receive an additional $50,000 if the film did not start shooting by February 2, 1946. Therefore, in August 1945, producer Darryl F. Zanuck had the second unit begin shooting in the mountains around Denver, Colorado, which were to portray the Himalayas in the film.

The film was nominated for multiple Academy Award, including Best Picture. Anne Baxter won the Oscar for Best Supporting Actress; she and Clifton Webb both won Golden Globes for their performances.