The Last Waltz was a concert by the Canadian-American rock group the Band, held on American Thanksgiving Day, November 25, 1976, at Winterland Ballroom in San Francisco. Members of the […] 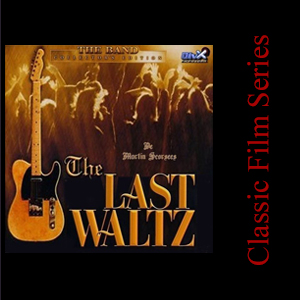 The event was filmed by director Martin Scorsese and made into a documentary of the same name, released in 1978. The film features concert performances, intermittent song renditions shot on a studio soundstage, and interviews by Scorsese with members of the Band.

The Last Waltz is hailed as one of the greatest concert films ever made.

The Band— Rick Danko on bass, violin and vocals; Levon Helm on drums, mandolin and vocals; Garth Hudson on keyboards and saxophone; songwriter Richard Manuel on keyboards, percussion and vocals; and guitarist, songwriter and occasional vocalist Robbie Robertson—started out in the late 1950s as a rock and roll band led by Ronnie Hawkins, and Hawkins himself appears as the first guest. The group backed Bob Dylan in the 1960s, and Dylan performs with the Band toward the end of the concert. The musical director for the concert was the Band’s original record producer, John Simon.

The film begins with the Band performing the last song of the evening, their cover version of the Marvin Gaye hit “Don’t Do It”. The film then flashes back to the beginning of the concert, and follows it more or less chronologically.

The live songs are interspersed with studio segments and interviews conducted by director Scorsese in which the Band’s members reminisce about the group’s history. Robertson talks about Hudson joining the band on the condition that the other members pay him $10 a week each for music lessons. The classically trained Hudson could then tell his parents that he was a music teacher instead of merely a rock and roll musician. Robertson also describes the surreal experience of playing in a burnt-out nightclub owned by Jack Ruby.

Manuel recalls that some of the early names for the Band included “the Honkies,” and “the Crackers.” Because they were simply referred to as “the band” by Dylan and their friends and neighbors in Woodstock, New York, they figured that was just what they would call themselves.

A recurring theme brought up in the interviews with Robertson is that the concert marks an end of an era for the Band, that after 16 years on the road, it is time for a change. “That’s what The Last Waltz is: sixteen years on the road. The numbers start to scare you,” Robertson tells Scorsese. “I mean, I couldn’t live with twenty years on the road. I don’t think I could even discuss it.”