Price $0
The Hunters is a 1958 big-screen American war/ adventure film loosely adapted from the novel, The Hunters, by James Salter.  Produced and directed by Dick Powell, it stars Robert Mitchum as a flight commander during the Korean War, and Robert Wagner as a cocky young  pilot assigned to his flight. Lee Philips, May Britt, Richard […] 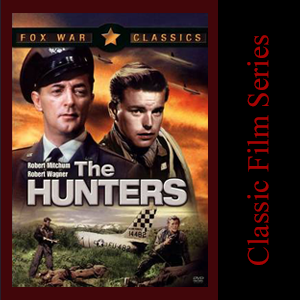 The Hunters is a 1958 big-screen American war/ adventure film loosely adapted from the novel, The Hunters, by James Salter.  Produced and directed by Dick Powell, it stars Robert Mitchum as a flight commander during the Korean War, and Robert Wagner as a cocky young  pilot assigned to his flight.

Lee Philips, May Britt, Richard Egan, and John Gabriel complete the cast of this romantic adventure, which features spectacular flying sequences as well as interpersonal tensions on and off the ground.

Among his pilots is a troubled, insecure, heavy-drinking pilot (Lee Philips), with whose neglected wife Mitchum is already in love.  Adding to his problems is the arrival of a brash new young replacement,  (Robert Wagner), who ignores command orders in the sky.

The film was produced and directed by Dick Powell.  According to Turner Classic Movies, “Twentieth Century-Fox’s submarine combat movie The Enemy Below was such a big hit in 1957 that the studio immediately assigned the film’s producer-director, Dick Powell, to another war movie: The Hunters (1958). Powell, of course, was also a big movie star, but his feature acting days were already behind him. In 1953, he had transitioned to a new career as a director and producer — though he would still occasionally act for television — with the fine suspense drama Split Second. The Hunters was his fifth and final big-screen directing effort.

“… Dick Powell sent Wendell Mayes’s script to Robert Mitchum, whom he had just directed in The Enemy Below — or, as Mitchum later recounted, Powell sent part of the script. Speaking to the London Sunday Express in 1978, Mitchum said, ‘Powell sent me 30 pages,…saying how good it was. And it seemed fine to me. I got to fly a fighter plane and spend a lot of time in the officers club in Japan. ‘And you can go to Japan and scout it out for a couple of weeks,’ he said. That sounded good, so I said ‘Yes.’ Then he sent me page 31. And I found out my plane crashed and I spent the rest of the film carrying some fellow through Korea on my back. ‘You ought to cast the part by the pound,’ I said. ‘Find some wisp. What’s Sinatra doing?’ But of course they saddled me with a hulk [Lee Philips] who got heavier by the minute and  I never got near Japan.’ 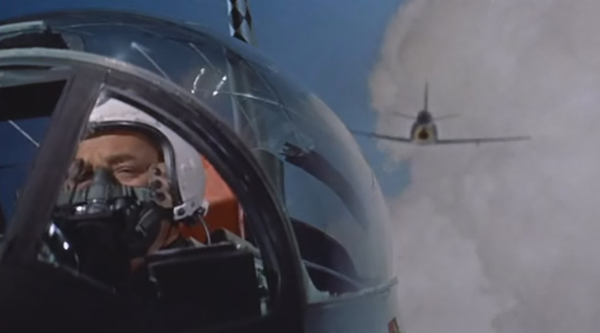 “For the role of a young hotshot pilot named Lt. Ed Pell, Fox cast 27-year-old Robert Wagner, who reported to work on The Hunters immediately following his honeymoon with Natalie Wood. In his memoir, Wagner wrote that he ‘adored both [Powell and Mitchum]. Powell was one of the great guys of all time, and Mitchum and I became fast friends…’ ”   Jeremy Arnold, TCM

“The brash detachment of young Mr. Wagner, of all people, in the role of a jive-talking killer ace, steals the picture from everybody, excluding the jet planes.  The sight of these silver-bellied beauties streaking across the sky, or barking away in counter-attack, may be reward enough for many customers. The sequence of the Americans roaring toward the enemy under a carpet of smoky contrails is thrilling.”  New York Times