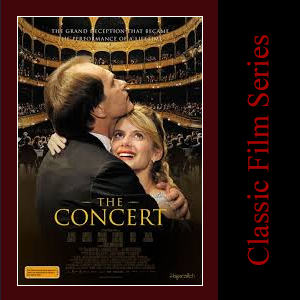 The Concert is a 2009 French comedy film by Radu Mihăileanu starring Aleksei Guskov, Mélanie Laurent and Miou-Miou. It follows the farcical struggles and mis-adventures of a former world-famous conductor of the Bolshoi Theatre orchestra, known as “The Maestro”, Andrey Simonovich Filipov, as he tries to re-claim his life and career.

It won the Best Original Score and Best Sound awards at César Awards 2010. It was also nominated for two Magritte Awards in the category of Best Co-Production and Best Editing for Ludo Troch in 2011, and Best Foreign Film at the 68th Golden Globe Awards.

Filipov, whose career was publicly destroyed by Leonid Brezhnev for defending Jewish musicians, has been reduced to working as a mere janitor in the theatre where he once conducted, becoming an alcoholic in the process.

While cleaning his boss’ office he intercepts an official invitation from the prestigious Théâtre du Châtelet in Paris to replace a concert of the Los Angeles Philharmonic Orchestra that was canceled at the last minute. Filipov comes up with a plan to reunite his former orchestra, composed of old Jewish and Gypsy musicians – who also have been reduced to making a living as movers or taxi drivers – to perform in Paris and complete a performance of Tchaikovsky’s Violin Concerto.