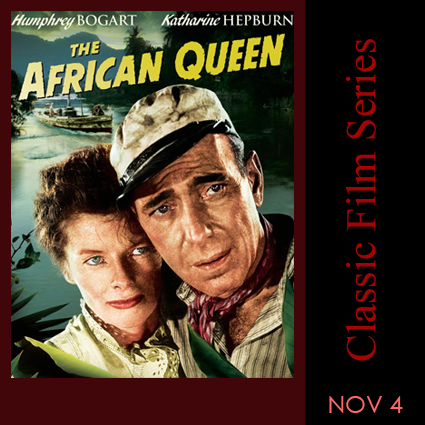 Ogunquit Performing Arts presents the first film in its 2018-19 Classic Film Series on Sunday, November 4, 2018 at 2 pm in the Dunaway Center with the screening of The African Queen.  Starring Katharine Hepburn and Humphrey Bogart, this classic adventure film will be shown on a wall-sized screen, with free admission, parking, and popcorn.  Judson Dunaway Center, 23 School Street, Ogunquit.

The African Queen (1951) began as a novel written by English author C.S. Forester and published in 1935. This unique adventure story about the relationship between a prim spinster and the scruffy boat captain who takes her down the river was kicked around as a potential movie idea for years in Hollywood. RKO thought about making it with Charles Laughton and his actress wife Elsa Lanchester, but ultimately the project was scrapped. The thinking was that audiences would not want to see a romance between two middle-aged people….

Still, others saw potential in The African Queen. In 1946 Warner Bros. bought it as a possible vehicle for Bette Davis. That never came to fruition, however, and by 1947 they were trying to unload the property.

Director John Huston, who had always been a fan of the book, wanted desperately to purchase the rights to the property with his producing partner Sam Spiegel as a project for their independent film company. Horizon Pictures…Funding for the project was achieved by a collaboration with Sound Services Inc., whose equipment was also used in the film’s production.

Huston was adamant that writer James Agee would be the one to help him write the screenplay. Agee was a poet, novelist and film critic whose work Huston had always admired…Agee agreed and flew out to California, where he and Huston holed up in a resort hotel outside of Santa Barbara to work on the screenplay. They set a strict regimen for themselves of work and exercise. Though they got a tremendous amount done, Agee was not taking care of himself-he was drinking, smoking and eating too much and not getting enough sleep. Before they could finish the script, Agee had a heart attack and was out of commission for a lengthy recuperation.

Meanwhile, Huston was searching for the ideal leads. Katharine Hepburn was the first one contacted. In 1950 she was touring with the stage production of Shakespeare’s As You Like It, which was currently playing in Los Angeles. Sam Spiegel sent her a copy of the original novel The African Queen to read while she was staying at the home of her good friend Irene Selznick. She read it and loved it, knowing that the part of Rose would be perfect for her.

Sam Spiegel came out to visit Hepburn, and the two discussed the project and potential actors to play opposite her. Charlie Allnut was supposed to have a Cockney accent, which limited their choices until Spiegel suggested Humphrey Bogart. They both thought him perfect for the part and simply decided to make his character Canadian, which would solve the problem of the Cockney accent. As Katharine Hepburn later wrote in her 1987 book The Making of the African Queen; or How I Went to Africa with Bogart, Bacall and Huston and Almost Lost My Mind, “Now, looking back at that conversation-can you imagine anyone but Bogie playing that part? He was really it-hook, line and sinker”.

John Huston and Humphrey Bogart had worked well together previously on The Maltese Falcon (1941), Across the Pacific (1942), The Treasure of the Sierra Madre (1948) and Key Largo (1948) so Huston called up his old pal and said, “Hey, old son, I have a great property. The hero’s a low-life, and since you’re the biggest low-life in town the part is therefore ideal for you!” Though Bogart wasn’t keen on shooting in Africa, he trusted his friend Huston. “He’s brilliant and unpredictable,” said Bogart of Huston. “Never dull. When I work with John, I think about acting. I don’t worry about business.” Huston, in turn, called Bogart “an ideal collaborator and companion…He’s a joy to work with…his figure seemed to find its way into whatever I did.”

Bogie had never worked with Katharine Hepburn, and neither had John Huston for that matter. The actor was somewhat leery of working with her, having heard she could be difficult. However, when Bogie and Huston met with Hepburn, she won them over. In her 1979 autobiography By Myself, Lauren Bacall (Humphrey Bogart’s wife) said that Bogie had never wanted to travel out of the country, but she herself was longing to go and see the world. “Bogie,” she said, “liked his life as it was; going to New York was all the traveling he wanted to do. Finally Sam Spiegel told Katharine Hepburn that he had Bogie and John – to John that he had Bogie and Katie – told Bogie that he had John and Katie – and The African Queen was put together.”

The African Queen was a big box office and critical success, honored with four Academy Award nominations for Best Actor, Actress, Director and Screenplay. It also provided a major career boost for the director and his two stars. In fact, Humphrey Bogart scored his biggest triumph with his role as Charlie Allnut, and he won his only Academy Award as Best Actor for it.