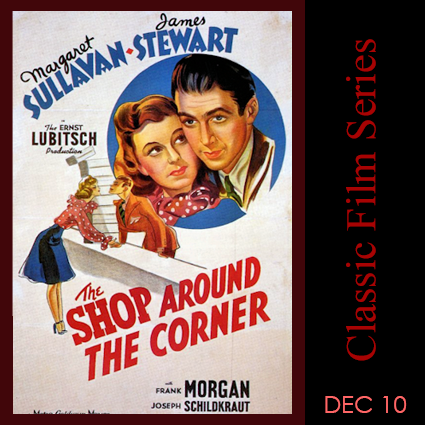 The Shop Around the Corner is a 1940 American romantic comedy film produced and directed by Ernst Lubitsch, and starring Margaret Sullavan, James Stewart, and Frank Morgan.  The screenplay was written by Samson Raphaelson, based on the 1937 Hungarian play Parfumerie by Miklos Laszlo.

Set at Christmastime, the film is about two employees at a small shop in Budapest who can barely stand each other, not realizing they’re falling in love as anonymous correspondents through their letters.

“By 1940, Lubitsch was renowned throughout Hollywood for his popular movies that combined romance and wit.  Lubitsch had made his name with sophisticated fare like Design for Living (1933) and Ninotchka (1939), but his dream project was adapting Miklos Laszlo’s 1937 play Parfumerie for the big screen.  Lubitsch had bought the rights to this simple story … shortly after its debut, but he sat on the property for a few years until he got the right studio (MGM with its luxe production values) and the right stars (Lubitsch never wanted anyone other than Stewart for the male lead, but several actresses, including Janet Gaynor, were considered before Lubitsch settled on Sullavan.)

“The Shop Around the Corner tells the story of the assorted employees of a notions shop in Budapest.  The main characters are head clerk Alfred Kralik (Stewart) and new employee Klara Novak (Sullavan), but the film is really an ensemble piece that focuses on each employee in turn, including the curmudgeonly boss Matuschek (Frank Morgan), a kindly family man Pirovitch (Felix Bressart), and a handsome but vain salesman Vadas (Joseph Schildkraut).

“Lubitsch, who helped write the screenplay with Samson Raphaelson, based The Shop Around the Corner on his childhood memories.  Lubitsch’s father was a tailor, and he grew up helping out in the family’s shop.  ‘I have known just such a little shop in Budapest,’ he said at the film’s Radio City Music Hall debut.  ‘The feeling between the boss and those who work for him is pretty much the same the world over.’

“It is those universal feelings that make The Shop Around the Corner a great work of art.  The relationship between Klara and Alfred is well-drawn – they get off on the wrong foot and things go downhill from there – and Sullavan and Stewart have great chemistry, but the film’s central theme expands to fit everyone at the shop.”  Amanda Garrett