Price Free Admission, Parking and Popcorn!
A chilling scenario of the dangers of misplaced power in the military-industrial complex as a right-wing extremist General attempts to overthrow the US President. 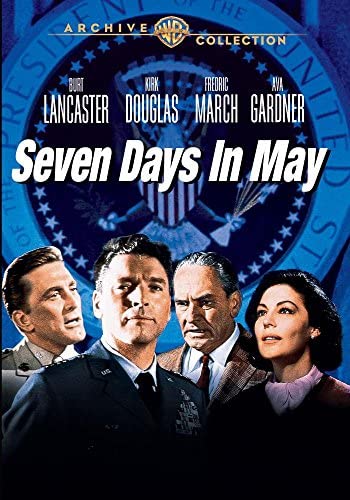 A homegrown coup is plotted by the Chair of the Joint Chiefs of Staff  (Lancaster) against the President of the United States (Fredric March). Military leaders believe that the President’s signing of the Nuclear Disarmament Treaty with the Soviet Union is nearly treason and will result in a sneak Soviet attack on the U.S. The viability of the plot rests in the fact that no one wants to believe that such a coup could ever be in process and that the people who are involved are actually involved.  As the plot is exposed, treachery, loyalty, betrayal, civilian/military leadership tension, kidnapping, murder, public opinion and patriotism all play a part as the plot unravels.

Based on the 1962 book of the same title, written by Fletcher Knebel and Charles W Bailey II, adapted for the screen by Rod Sterling, the movie received Oscars for Best Art Direction and Best Supporting Actor (Edmond O’Brien)