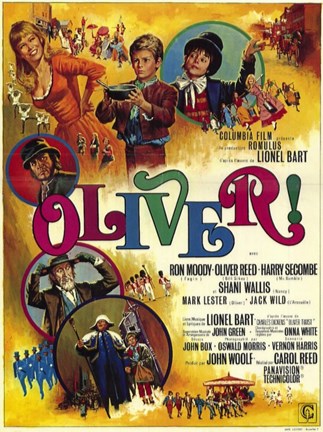 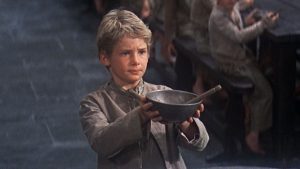 Based on an adaptation of Charles Dickens’ 1838 novel Oliver Twist, this 1968 British musical drama stars Ron Moody, Oliver Reed, Shani Wallis, and Mark Lester as Dickens’ fabled workhouse orphan.  Winner of 6 Academy Awards, the production contains such musical numbers as “Consider Yourself,” “As Long As He Needs Me,” and “Where Is Love?”

Roger Ebert of the Chicago Sun-Times awarded the film four out of four stars. “Sir Carol Reed’s Oliver! is a treasure of a movie,” he wrote. “It is very nearly universal entertainment, one of those rare films like The Wizard of Oz that appeals in many ways to all sorts of people. It will be immediately exciting to the children, I think, because of the story and the unforgettable Dickens characters. Adults will like it for the sweep and zest of its production. And as a work of popular art, it will stand the test of time.   It is as well-made as a film can be.”