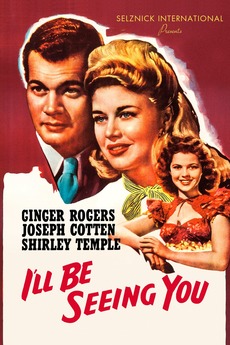 Two troubled souls Mary Marshall (Ginger Rogers) and Sgt. Zachary Morgan (Joseph Cotton) meet while seated across from each other on a train bound for Pinehill. Each has a week’s Christmas furlough, and as they begin to fall in love, each hopes to hide the secret of an unhappy past for the brief length of their time together.  Also starring Shirley Temple and Spring Byington, the 1944 film was among the first to explore the uncertain territory of postwar adjustment.

Ginger Rogers, by the 1940s was showing a gift for tougher, weightier roles, such as her award-winning performance in Kitty Foyle.  She could be intensely moving without ever succumbing to sentimentality. That’s a gift she also brings to I’ll Be Seeing You.

New York Times critic Bosley Crowther was particularly struck by Cotten’s performance, writing, “He plays the shell-shocked veteran with supreme restraint and with a calm and determined independence that beautifully reveals his pain and pride.”