Price Free Admission, Parking and Popcorn!
Wyatt Earp and Doc Holliday form an unlikely alliance which culminates in the legendary gunfight at the OK Corral in Tombstone Arizona, despite the tumultuous history between them. 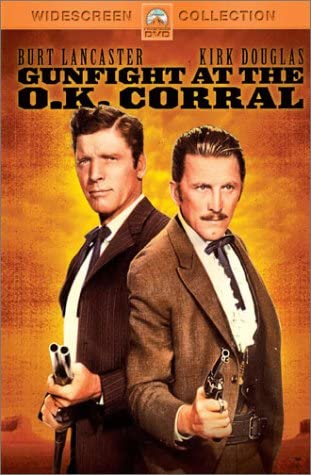 An early “buddy movie,” Earp’s mission to bring the Clayton family to justice also features Holliday’s love spurned by a long time traveling companion (Van Fleet) and Earp’s falling in love with a female gambler (Fleming) whom he arrested for violating the “no female gamblers allowed within the city limits.” The film ratchets between portrayals of guns as a method and solution to law breaking, and guns as a way to insure certain death. Seen through a modern lens, one might draw some existential questions. “There’s always a man faster on the draw than you are and the more you use a gun, the sooner you’re gonna run into that man.” Wyatt Earp

Based on a dramatized event of a 30 second shootout in 1881 between lawmen, led by Virgil Earp, and a loosely organized group of outlaws, the screenplay written by Leon Uris, was based on a 1954 article in Holliday Magazine, entitled  “The Killer” by George Scullin. The film received Oscar nominations in technical categories for editing and sound. The film was a big hit and earned $4.7 million on its first run and $6 million on re-release.  There have been a number of subsequent movies based on the 1881 event: My Darling Clementine, Badlands of Dakota (1941) and Hour of the Gun (1967).