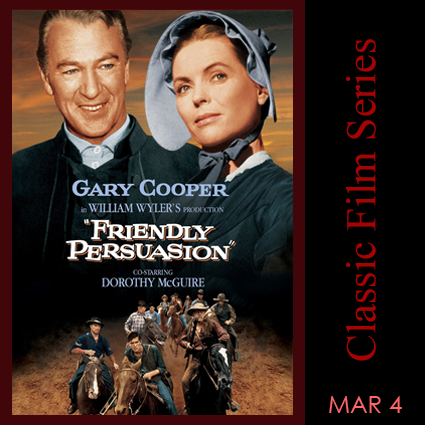 Friendly Persuasion (1956) focuses on the Birdwells, a peaceful family of Quakers who are thrust into the Civil War when a band of Confederates known as Morgan’s Raiders threatens their town. The eldest son, Josh, (Anthony Perkins) hears a plea for young men to help fight off the marauders and begins to question the anti-war, anti-violence values of his religion. His mother Eliza (Dorothy  McGuire) is against him going to battle, but his father, Jess, (Gary Cooper), a man of moral courage and understanding, recognizes his son’s need to work out his conflict and side with a just cause. When Josh is wounded in battle, his father goes into the war zone to save him. What he encounters there tests his faith and a way of life that will never be quite the same.

Producer-director William Wyler had author Jessamyn West’s novel Friendly Persuasion in mind for eight years before he brought the project to Allied Artists. They gave him a $1.5 million budget for his first color film, and shooting was to take place in the story’s original southern Indiana locale. By the time it was completed, on a San Fernando Valley estate and at the old Republic studios, the cost had swelled to $3 million.  A critical and financial success, the film brought in $8 million in box-office receipts by 1960 alone.

Friendly Persuasion was the first film to cast Gary Cooper as a parent with grown children and gave him one of his best late career roles. The internal conflicts as Jess Birdwell struggles with his son’s decision to forsake his Quaker faith to fight in the Civil War and his own urge to avenge a friend’s death in battle provided a perfect vehicle for his simple, understated acting style.

Wyler had always thought Gary Cooper the perfect actor for the part.  Although the actor was reluctant to undertake his first father role, he finally gave in after West took him to a Society of Friends prayer meeting. The stillness made him think he could capture the character’s spiritual nature.

Cooper complained that his fans would be disappointed if his character didn’t take up arms in the Civil War. He argued that they would expect him to do something. West suggested, “You will furnish them with the refreshing picture of a strong man refraining.”

Wyler’s dream casting for Cooper’s wife was Katharine Hepburn, but she wasn’t available.  Many others were considered, and Wyler actually tested Maureen O’Hara and Eleanor Parker before casting Dorothy McGuire.

While scouting talent in New York, Wyler saw several young actors for the role of Cooper’s conflicted son, including Anthony Perkins, who had only done one previous film.  Wyler was so impressed with Perkins’s insights into the character and his reading that he cast him without bothering to make a screen test.

Perkins had not yet learned how to drive at the time Friendly Persuasion was shot. Each morning he hitchhiked to the Allied Artists studios, where limousines were waiting to drive the cast to the shooting location. He often told drivers he was the stand-in for a hot young actor named Anthony Perkins, for whom they should watch in upcoming films.