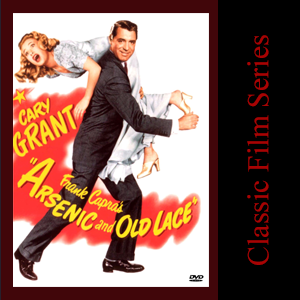 Arsenic and Old Lace is a 1944 American madcap, but dark, comedy film directed by Frank Capra,  starring Cary Grant, and based on Joseph Kesselring’s play Arsenic and Old Lace.   Set in the Brooklyn family home of the Brewsters, the plot concerns a drama critic, Mortimer Brewster, whose two beloved maiden aunts are caring for their benign but delusional brother Teddy, (a man who is living his life believing he is President Teddy Roosevelt.)   Mortimer learns on his Hallowe’en wedding day that his long-lost brother Jonathan is now a fiendish killer trying to escape from the police, and that his aunts are concealing lethal secrets of their own.

Enjoy this film on the wall-sized screen of the Dunaway Center, 23 School Street, Ogunquit.  Admission, Parking and Popcorn are free.

The script adaptation was by Julius J. Epstein and Philip G. Epstein.  Capra actually filmed the movie in 1941 because of star Cary Grant’s availability, but it was not released until 1944, after the original stage version had finished its run on Broadway.  The Broadway comedy opened at the Fulton Theatre on January 10, 1941 and ran for 1,444 performances, closing on June 17, 1944.

In the film,  Josephine Hull,  Jean Adair, and John Alexander reprised their stage roles as the Brewster siblings Abby, Martha, and Teddy, all three getting eight weeks’ leave of absence from the New York play to make the film.  Boris Karloff,  who played Jonathan, was denied permission to participate by the play’s producers, fearing that the absence of their main star would adversely affect the play’s attendance.  His role in the film was played by Raymond Massey, who was deliberately made up to look like Karloff, a running joke in both the play and the film.  The film’s excellent supporting cast also featured Priscilla Lane,  Jack Carson,  Edward Everett Horton,  and  Peter Lorre.

The lead role of Mortimer Brewster was originally intended for Bob Hope,  but he could not be released from his contract with Paramount.    Director Frank Capra had also approached Jack Benny and Ronald Reagan before learning that Grant would accept the role.

Frank Capra  enlisted in the U. S. Army Signal Corps in 1941 during filming. He received an extension of his order to report for active duty until late January 1942 so he could finish editing the picture.   Cary Grant donated his entire salary, $100,000, to the U.S. War Relief Fund.