Price $0
Yul Brynner and Kay Kendall star in this hilarious and successful 1960 cinematic version of the stage comedy by Harry Kurnitz. 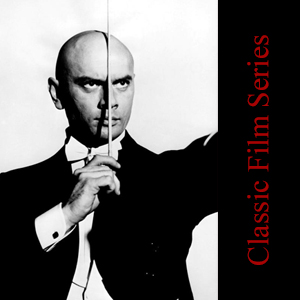 Yul Brynner and Kay Kendall star in this hilarious and successful 1960 cinematic version of the stage comedy by Harry Kurnitz. Brynner is a flamboyant symphony conductor with tremendous talent and ego to match. He spares no one in his relentless pursuit of musical perfection, while his elegant but giddy wife (Kay Kendall) scampers in his wake, mending fences with offended musicians, agents, orchestra managers, and donors.

This is a capricious romp through the chaotic life of a symphony orchestra, set against the music of Liszt, Beethoven, and Wagner, and given first class treatment throughout.   A British comedy film, Once More, With Feeling is directed and produced by Stanley Donen, and features brilliant supporting actors Gregory Ratoff and Geoffrey Toone. The screenplay was written by Harry Kurnitz, based on his play. Costumes for Kay Kendall were designed by Givenchy.

Yul Brynner was already an established star when he made this picture, bringing to his role both a commanding presence, impressive theatrical experience, and musical talent.   In addition to his work as a director and performer, Brynner was an active photographer and wrote two books. He was also an accomplished guitarist. In his early period in Europe he often played and sang gypsy songs in Parisian nightclubs with Aliosha Dimitrievitch. He sang some of those same songs in the film “The Brothers Karamazov. ” In 1967 he and Dimitrievitch released a record album The Gypsy and I: Yul Brynner Sings Gypsy Songs (Vanguard VSD 79265).

The vivacious and witty actress Kay Kendall was most prolific in British films, but also achieved popularity with American audiences, winning a Golden Globe Award for Best Actress Motion Picture Musical or Comedy for her role in the musical-comedy film “Les Girls”(1957). Educated in Wales, Scotland and London, she studied ballet for six years in London, joining a chorus line while still in her early teens. A vibrant and successful film career followed.

The play Once More, With Feeling which was adapted for this film, opened on Broadway on 21 October 1958 at the National Theatre, in a production directed by George Axelrod, designed by George Jenkins, and starring Joseph Cotten, Arlene Francis, and Walter Matthau, who was nominated for a Tony Award as best featured actor.

Admission, parking, and popcorn are free