Price $0
Based on the 1934 mystery best-seller by Agatha Christie, this stylish film stars Albert Finney (as Hercule Poirot,) Lauren Bacall, and the fabulous Orient Express itself, – the elegant train […] 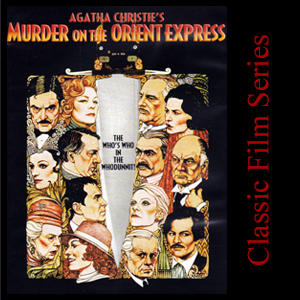 Based on the 1934 mystery best-seller by Agatha Christie, this stylish film stars Albert Finney (as Hercule Poirot,) Lauren Bacall, and the fabulous Orient Express itself, – the elegant train carrying passengers in luxury and comfort from Istanbul to Calais. Joining them aboard is “the greatest cast of suspicious characters ever involved in murder,” including Ingrid Bergman, Jacqueline Bisset, Sean Connery, John Gielgud, Wendy Hiller, Anthony Perkins, Vanessa Redgrave, Richard Widmark, and Michael York.

En route to Calais, the fabled train is brought to a standstill by a snow slide in the Balkans. Its passengers include royalty, the wealthy, and the infamous., one of whom is murdered. The famous, Belgian detective Hercule Poirot is also aboard, and is begged by the owner of the line to solve the crime before the tracks are cleared and Yugoslav police become involved.

Agatha Christie herself was once stranded on the Orient Express when the tracks were washed away in a mudslide. Her letters include descriptions of her fellow passengers, who influenced the plot and characters of the book. At the center of Dame Agatha’s plot is the kidnapping of three-year-old heiress, Daisy Armstrong, an episode which the author based on the actual kidnapping/murder case of Charles Lindbergh’s infant son in 1932.

Directed by Sidney Lumet, the film richly evokes the era of Europe in the thirties, and received six Academy Award nominations, with Ingrid Bergman winning as Best Supporting Actress.