This 1963 black and white crime mystery features George C. Scott as a retired British intelligence officer as he, (together with an old friend, a World War II counterpart in […] 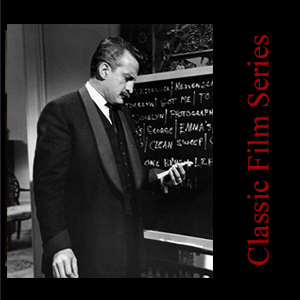 This 1963 black and white crime mystery features George C. Scott as a retired British intelligence officer as he, (together with an old friend, a World War II counterpart in the French Resistance), investigates a series of apparently unrelated deaths and the list that ties these crimes together. Set in the fog-enshrouded streets and estates of England, the atmospheric film was directed by John Huston from a screenplay by Anthony Veiller, based on the 1959 novel of the same title by Philip MacDonald.

The film also stars Kirk Douglas, Dana Wynter, Clive Brook, Jacques Roux, and Herbert Marshall. Several of the bit characters are played by famous stars in heavy makeup, and each of these stars — Burt Lancaster, Robert Mitchum, Frank Sinatra, and Tony Curtis — “unmasks” in the epilogue.

Adrian Messenger (John Merivale) asks his friend, British colonel Anthony Gethryn (George C. Scott), to check on the whereabouts of the eleven men named on a written list. Not long afterward, the plane on which Messenger is travelling is deliberately blown up. The mystery killer evidently slipped the bomb on the plane while disguised as a priest, and we soon learn that the killer adopts a different guise for each of his subsequent murders.

The List of Adrian Messenger is a race-against-time thriller in which Colonel Gethryn has to work out who the victims are, and why, and identify the killer and stop him. It’s beautifully written and well-portrayed.

By the time he wrote The List of Adrian Messenger, Philip MacDonald was a writer fully in command of his craft with almost half a century of experience, and it shows in both the book and the film. This is a taut, expertly plotted thriller with evocative locations, memorable characters and a compelling villain.