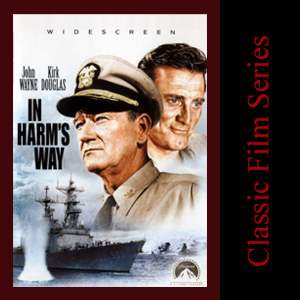 The film recounts the lives of several US naval officers and their wives or lovers while based in Hawaii as the US involvement in World War II begins. The title of the film comes from a quote from American Revolutionary naval hero John Paul Jones: “I wish to have no connection with any ship that does not sail fast, for I intend to go in harm’s way.”

The book, Harm’s Way, is the definitive Admiral’s novel. The author, James Bassett, was a Public Affairs officer on Admiral “Bull” Halsey’s staff during WWII and his observations of that period are the basis for this novel.

The film presents a relatively unromanticized and realistic picture of the American Navy and its officers in the period before and shortly after the start of World War II, complete with bureaucratic infighting among the brass and sometimes disreputable private acts by individuals.

In Harm’s Way, was indeed an epic undertaking and Preminger was able to count on the US Defense Department for practically everything he needed in order to recreate the Japanese attack on Pearl Harbor and other combat scenes. The U.S. Navy “supplied him with the USS St. Paul, a cruiser, and sailed the entire cast and crew from Seattle to Hawaii. On the way Preminger shot a number of the onboard scenes, ordering the St. Paul’s captain and crew around as if they were employees. The naval base at Pearl Harbor became a Preminger set…” (Jeff Stafford for TCM)