In this prose work by the Welsh poet Dylan Thomas, an old man shares his heartwarming memories of Christmases past with his grandson. 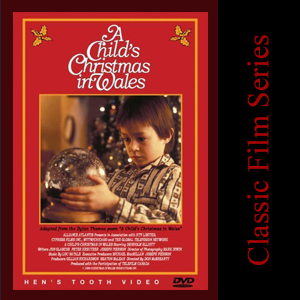 It’s Christmas Eve in Wales. A young boy named Thomas is excited about the holiday, but he’s also disappointed because it’s raining instead of snowing. His grandfather gives him an old snow globe as an early Christmas present and starts telling colorful, amusing stories about his childhood Christmases that are shown in flashback.

The film is based on A Child’s Christmas in Wales, a prose work by the Welsh poet Dylan Thomas. Originally emerging from a piece written for radio, it was recorded by Thomas in 1952. The story is an anecdotal retelling of a Christmas from the view of a young child and is a romanticized version of Christmases past, portraying a nostalgic and simpler time. It is one of Thomas’s most popular works.

An original movie made for PBS and winner of 11 major film awards, A Child’s Christmas in Wales was called “picture-perfect” by the New York Times, and “a genuine holiday classic” by the Chicago Tribune.   The film stars Denholm Elliott, Mathonwy Reeves, and Glynis Davies. Directed by Don McBrearty, it was adapted from the Thomas book by Jon Glascoe and Peter Kreutzer.

It was filmed on location in Montgomery Wales, which is probably little changed from when Dylan Thomas was a boy in Swansea. The story is told from the viewpoint of the author recounting a festive season as a young boy in a fictionalized autobiographical style. In the first passage Thomas searches for a nostalgic Western belief in Christmas past with the line, It was snowing. It was always snowing at Christmas. He furthers the idyllic memory of childhood past by describing the snow as being better and more exciting than the snow that is experienced as an adult.

Thomas recorded the story in 1952. Although the recording sold modestly at first, it became his most popular prose work in America. It was a 2008 selection for the United States National Recording Registry, stating it is “credited with launching the audiobook industry in the United States.”