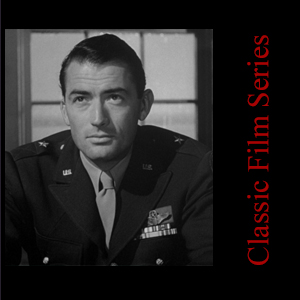 The film follows the progress of a young general (Peck) who, toward the end of 1942, takes command of a bomber group operating from a base in England, and elevates it from a bleak combat record and low morale to a peak of aggressiveness and pride by pushing the limits of “maximum effort” and human endurance.

The film features actual war footage of attacking fighter planes, and vividly portrays the terrible tension of bomber crews under fire, their relief on a safe return, and their horrendous summoning of enough resolve to fly these missions every day.

“… one of the first and arguably the greatest of the Hollywood films to examine the pressures of command and psychological toll of making life and death decisions…” Sean Axmaker, TCM

Twelve O’Clock High was directed by Henry King and produced by Darryl F. Zanuck. It marked a turning away from the optimistic, morale-boosting style of wartime films and toward a grittier realism that dealt more directly with the human costs of war.

It was filmed on Air Force Bases in the United States, and at the RAF Barford St. John airfield in Oxfordshire, England.

The film is based on the novel by Sy Bartlett and Beirne Lay, Jr., with screenplay by the authors. Bartlett and Lay drew on their own wartime experiences with Eighth Air Force bomber units. At the Eighth Air Force headquarters, Bartlett had worked closely with Colonel Armstrong, who was the primary model for the leading character. The film’s 918th Bomber Group was modeled primarily on the 306th, because that group remained a significant part of the Eighth Air Force throughout the war in Europe.