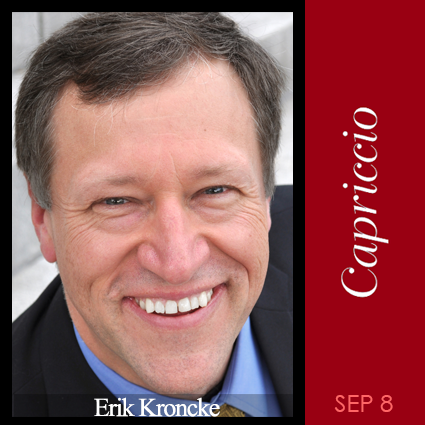 Come and explore music written for the bass voice in opera, songs, and musical theater with internationally acclaimed bass Erik Kroncke and world renowned pianist Mary Jane Austin. Covering many composers, genres, and styles, you’re sure to hear music that you enjoy, as well as some new favorites.

Erik’s engaging presentation of each piece, makes for an enjoyable evening.  Mary Jane Austin’s magical playing goes from the subtle nuance of song to the bombast of a complete orchestra.  Join us as we take you on a journey of music that will enliven your soul and fill your heart with joy.

The music written for bass uses the full range of voice from the extremely low to high and Erik and Mary Jane flesh out the music to its fullest extent and emotional impact.  It will be an evening to remember and you will be talking about it long afterwards.

Since his debut in 2000, Erik Kroncke’s unique bass voice has been in demand by opera companies and orchestras all over the world. He has been heard in such varied repertoire as Sarastro in Die Zauberflöte, Gremin in Eugene Onegin, Ramphis in Aida, Commendatore in Don Giovanni, Philip and the Grand Inquisitor in Don Carlos, Hunding in Die Walküre, and Daland in Der Fliegende Holländer. He has appeared with many companies including the Sarasota Opera, Opera San José, Chautauqua Opera, Green Mountain Opera, Bronx Opera, Austin Lyric Opera, Opera Theater of the Rockies, Hudson Opera Theater, Delaware Valley Opera, New Jersey Verismo Opera, Lyric Opera Virginia, and Opera in the Heights.

He was the American Wagner and St. Bonaventura award winner from the Liederkranz competition in 2008. The same year, he made his South Korea debut with the Korean W Philharmonic in Seoul as the bass soloist in Beethoven’s 9th symphony as well as his debut with Opera San José as Gremin in Eugene Onegin.

His symphonic and oratorio performances have included engagements with the New York Philharmonic, Danbury Symphony Orchestra, Chautauqua Symphony, Vermont Philharmonic, and the American Classical Orchestra in such varied repertoire as the Shostakovich 13th, Haydn’s the Seasons, as well as “The Three Basses” concerts.