Price $0
This event has been cancelled due to weather. The Three Faces of Eve, both a best-selling book and a major motion picture, is the true story of a young housewife […] 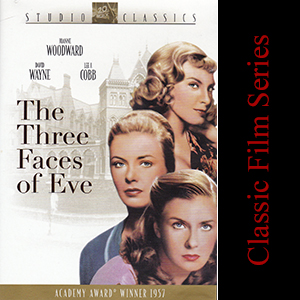 This event has been cancelled due to weather.

The Three Faces of Eve, both a best-selling book and a major motion picture, is the true story of a young housewife who suffered from multiple personality disorder (MPD). Her psychiatrists, Corbett H. Thigpen and Hervey M. Cleckley of the Medical College of Georgia (later Georgia Health Sciences University) in Augusta, published the book in 1957, and a film adaptation was released that same year. Produced and directed by Nunnally Johnson, a Georgia native, the film featured another Georgian, Joanne Woodward, in the title role.

Twentieth Century Fox purchased the film rights to the book at the urging of Nunnally Johnson, who had obtained the galley proofs in 1956. While the book was still in press, Johnson convinced the doctors to use the title The Three Faces of Eve and adapted the work as a screenplay. (Thigpen and Cleckley share writing credits for the film.)

Johnson turned to a relative newcomer to Hollywood, Joanne Woodward to play the title role. She had appeared in numerous television productions but had only two major movie roles to her credit when she was cast. Johnson considered Woodward’s own Georgia background to be a major asset in playing this fellow southerner. What everyone did agree upon was Joanne Woodward’s superb performance, in which her masterful changes of facial expression, voice, and body language evoke the three personalities. She won both the Golden Globe and Academy Award for Best Actress.