Price $15 in advance, $18 at the door, $5 Students
This is the featured 2nd night event for the Ogunquit Performing Art’s 25th Annual Capriccio, a two-week long ‘Celebration of the Arts’ in Ogunquit, Maine. Grammy Award winner Paul Sullivan […] 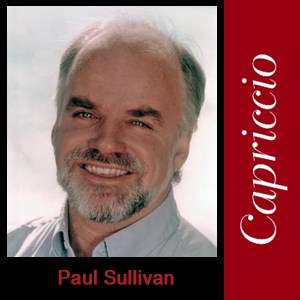 This is the featured 2nd night event for the Ogunquit Performing Art’s 25th Annual Capriccio, a two-week long ‘Celebration of the Arts’ in Ogunquit, Maine.

Grammy Award winner Paul Sullivan has enjoyed a richly varied and distinguished career as a composer and a pianist.

According to Sullivan “I was nominated as part of the Paul Winter Consort for our CD, “Silver Solstice”, which was one of the finalists for the “Best New Age Album” category. “Silver Solstice” is a collection of recordings made during our Winter Solstice concerts in New York over…several years. As a member of the band, I played on most of the songs, and was lucky enough to be featured in a solo performance of my own song, “The Rising Moon”.

In his solo performances, he creates a relaxed and intimate feeling with his audience through his pleasant and quirky observations about music and life. His warm and inviting personality, coupled with his world-class musicianship, wins over new listeners immediately and usually makes them life-long fans.

As a soloist, with his trio, and as a member of the Paul Winter Consort, he’s played concert tours in most of the US and Europe as well as Croatia, Israel, Costa Rica, and Japan. He’s performed among the dunes of the Negev Desert, in Leonard Bernstein’s living room and on the stages of many of the world’s finest concert halls. He has also performed with some legendary orchestras, such as the Philadelphia Orchestra under Eugene Ormandy, the Boston Pops under both Arthur Fiedler and Keith Lockhardt and several regional orchestras.

As a jazz player he has worked in some of New York’s most prestigious clubs, including Sweet Basil, The Village Vanguard, and Bradley’s. He has played with a wide variety of jazz masters from Benny Goodman to Tommy Flanagan, as well as Red Mitchell, Lou Donaldson, George Mraz, Gerry Hemingway and many other luminaries. His 15 CDs have sold over 300 thousand copies and have won 3 Indie Awards. His music has been broadcast internationally, as well as on all the major American networks, including National Public Radio.

In the theater Sullivan has worked as a musical director, pianist, and conductor for many Off-Broadway and Broadway shows. He played keyboards and shared the conducting duties for the original production of the musical Nine, which won a Tony Award for Best Musical.

Sullivan has also worked extensively in the dance world, playing piano for Merce Cunningham’s classes, writing music for the Rockettes at Radio City Music Hall and has enjoyed a long friendship with the Pilobolus Dance Theater, writing over 15 scores for them.

Tickets are $15 when purchased in advance, $18 at the door and $5 for students, and are available at: Ogunquit Welcome Center, Ogunquit Camera Shop, and the Dunaway Center.

Back to Capriccio Calendar of Events