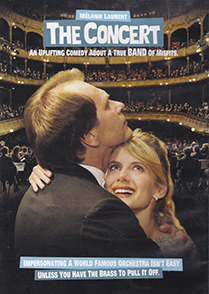 The Concert, the story of a band of misfits posing as the Bolshoi Theatre Orchestra in a Paris performance, is the seventh film of Ogunquit Performing Arts 14th season of the Classic Film Series and will be shown¬ at the Dunaway Center, 23 School Street in Ogunquit on Sunday April 12, 2015 at 2 pm. Admission is free and so is the popcorn.

The Concert , the 2009 French comedy film By Radu Mihăileanu starring Aleksei Guskov, Mélanie Laurent and Miou-Miou will be shown Sunday April 12, 2015, 2 pm, at the Dunaway Center, 23 School Street, Ogunquit. The film follows the adventures of a group of misfits, former Russian musicians who had been ousted by Leonid Brezhnev now making a living in Moscow as cab drivers, garbage men, and flea Market traders, as they impersonate the Bolshoi Theatre Orchestra in a Paris performance.

While still working at the Bolshoi, but now cleaning his boss’ office, Andry Simonovich Filipov former celebrated conductor of Russia’s renowned Bolshoi Orchestra, intercepts an official invitation to the Bolshoi from the prestigious Théâtre du Châtelet in Paris to play as replacement for the cancelled Los Angeles Philharmonic Orchestra. Filipov comes up with a plan to reunite his former orchestra, composed of old Jewish and Gypsy musicians (who have also been reduced to doing menial jobs) to go to Paris posing as the official Bolshoi Orchestra.

Impersonating a world-famous orchestra isn’t easy, but this delightful comedy follows the adventures of this group as they have the courage to go on stage to give a complete performance of Tchaikovsky’s Violin Concerto. At the last moment, the entire orchestra appears at the theatre despite the fact that not a single rehearsal has taken place. In the meantime, the real manager of the Bolshoi, who happened to be vacationing in Paris and heard about the concert, appears at the theatre to prevent the performance, but he is intercepted locked in a broom closet. The concert has a wobbly beginning due to the lack of rehearsals, but do they manage to pull it off?? Come to the Dunaway Center on 23 School Street in Ogunquit on Sunday April 12, 2015 at 2 pm to find out! The film will be shown on a wall-size screen with introduction by OPA member Steve Einstein. There will be free popcorn, too. It’s a delightful way to spend a winter Sunday afternoon.

The Concert won the Best Original Score and Best Sound awards at César Awards 2010. It was also nominated for two Magritte Awards in the category of Best Co-Production and Best Editing for Ludo Troch in 2011, and Best Foreign Film at the 68th Golden Glove Awards.

Mark your calendars to reserve the date for the final Classic Film of the 2014-15 series: