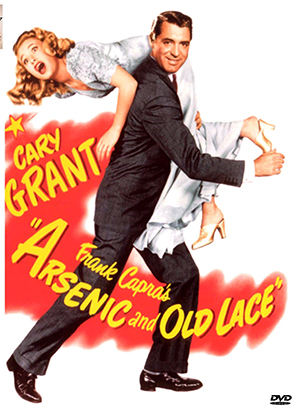 “Arsenic and Old Lace”, a comedy film starring Cary Grant, is the first presentation in Ogunquit Performing Arts’ 16th annual Classic Film Series, to be shown on Sunday afternoon November 6, 2016, 2 pm at the Dunaway Center, 23 School Street in Ogunquit. Admission is free and there is plenty of free parking. Free popcorn, too.

Ogunquit Performing Arts opens the 16th season of the Classic Film Series Sunday, November 6, 2016–2 pm at the Dunaway Center, 23 School Street in Ogunquit with the showing of the 1944 comedy film, ”Arsenic and Old Lace.” The film will be shown on a full wall-size screen, admission is free, there is plenty of free parking, and popcorn is served, too! What better way to spend a November Sunday afternoon?

Cary Grant, Priscilla Lane, Raymond Massey and Peter Lorre star in this adaptation of the hilarious Broadway play that ran for 1,444 performances. Grant plays Mortimer Brewster, a previously confirmed bachelor who falls for the “girl next door”, Elaine Harper, played by Priscilla Lane. The story centers on bizarre events that unfold as Mortimer’s two aunts complicate things for the newly married couple.

Listed 30th on the American Film Institute’s 100 funniest films, it was recommended by the New York Times as “good macabre fun.” At its release, ”Arsenic and Old Lace” was described in The New Yorker as being “as funny in picture form as on the stage, and that is very funny indeed.”

The role of Mortimer Brewster originally was offered to Bob Hope but his schedule conflicted with that of the production.  Had Grant not accepted the role, it might have gone to Jack Benny or Ronald Reagan. Josephine Hull and Jean Adair both of who filled the same roles on the Broadway stage played the parts of Mortimer’s aunts in the film.

Don’t miss this hilarious Cary Grant film, “Arsenic and Old lace” to be shown at the Dunaway Center, 23 School Street in Ogunquit on Sunday afternoon January 3, 2016 at 2 pm. A good way to relax prior to the hectic holiday season. The film is shown on a full wall-size screen, admission is free, and popcorn is served!