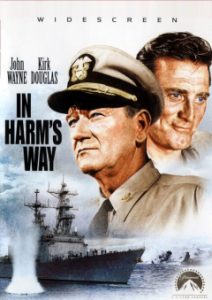 In Harm’s Way, the final film in the 2014-15 Classic Film Series will be shown on May 10, 2015 at 2 pm at the Dunaway Center, 23 School Street in Ogunquit. The film stars John Wayne and is set in Hawaii as the U.S involvement in World War II begins. Admission is free and so is the popcorn.

The final film in Ogunquit Performing Arts 2014-2015 Classic Film Series, In Harm’s Way, will be shown on Sunday May 10, 2015 at 2 pm at the Dunaway Center, 23 School Street, in Ogunquit. In Harm’s Way, the 1965 epic World War II film, was produced and directed by Otto Preminger and stars John Wayne, Kirk Douglas, Patricia Neal, Tom Tryon, Paula Prentiss, Stanley Holloway, Burgess Meredith, Brandon deWilde, Jill Haworth, Dana Andrews, and Henry Fonda. It was the last black-and-white World War II epic and the last black-and-white John Wayne film. The screenplay was written by Wendell Mayes based on the Novel of the same name by James Bassett.

The film is set in Hawaii on the eve of the attack on Pearl Harbor (December 6, 1941) and culminates in a decisive naval battle between the U.S. Navy and the Japanese fleet. It recounts the lives of several U.S. naval officers and their wives or lovers while based in Hawaii as the U.S. involvement in World War II begins. The title of the film comes from Revolutionary War hero John Paul Jones: “I wish to have no connection with any ship that does not sail fast, for I intend to go in harm’s way.

In Harm’s Way, was indeed an epic undertaking and Preminger was able to count on the US Defense Department for practically everything he needed in order to recreate the Japanese attack on Pearl Harbor and other combat scenes. The U.S. Navy “supplied him with the USS St. Paul, a cruiser, and sailed the entire cast and crew from Seattle to Hawaii. On the way Preminger shot a number of the onboard scenes, ordering the St. Paul’s captain and crew around as if they were employees. The naval base at Pearl Harbor became a Preminger set…” (Jeff Stafford for TCM)

In Harm’s Way was nominated for the 1965 Academy Award for Cinematography (Black-and-White) and was screened at the 1965 Cannes Film Festival. Patricia Neal received a 1966 BAFTA Film Award as Best Foreign Actress.

Come to the Dunaway Center on 23 School Street in Ogunquit on Sunday May 10, 2015 at 2 pm for this final film in the 2014-15 Classic Film Series. The film will be shown on a wall-size screen with introduction by OPA member Judy Yates. There will be free popcorn, too. It’s a delightful way to spend a Sunday afternoon.