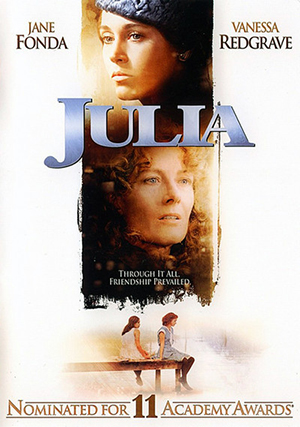 Julia, featuring two Academy-award winning performances, is the third presentation in Ogunquit Performing Arts’ 16th annual Classic Film Series, to be shown on Sunday afternoon January 8, 2017, 2 pm at the Dunaway Center, 23 School Street in Ogunquit. Admission is free and there is plenty of free parking. Free popcorn, too.

Ogunquit Performing Arts continues the 16th season of the Classic Film Series Sunday, January 8, 2017 — 2 pm at the Dunaway Center, 23 School Street in Ogunquit with the showing of the 1977 film, Julia. The film will be shown on a full wall-size screen, admission is free, there is plenty of free parking, and popcorn is served, too! Come in for some post-holiday enjoyment of fine filmmaking!

This 1977 Oscar-winning drama, based on the memoirs of playwright Lillian Hellman, depicts the relationship between two friends with unexpected consequences.  Lillian, on her way to a writers’ meeting in 1930’s Russia, plans to reunite with her life-long friend Julia, who in turn asks Lillian to smuggle funds into Germany to aid the anti-Nazi movement. Waiting in the wings is Lillian’s lover and mentor, Dashiell Hammett, who is unaware of her dangerous assignment.

Julia is a based on Hellman’s book of memoirs Pentimento, a chapter of which purports to tell the story of her relationship with an alleged lifelong friend, “Julia,” who fought against the Nazis in the years prior to World War II.

Julia, directed by Fred Zinnemann, from a screenplay by Alvin Sargent, was received positively from the critics and was nominated for eleven Academy Awards, including Best Picture, Best Director for Fred Zinnemann, and Best Actress for Jane Fonda.   It ended up winning three awards, Best Supporting Actor for Jason Robards, Best Supporting Actress for Vanessa Redgrave,  and Best Adapted Screenplay for Alvin Sargent’s script.

Lillian Florence “Lilly” Hellman (1905 – 1984) was an American dramatist and screenwriter known for her success as a playwright on Broadway, as well as her left-wing sympathies and political activism. She famously was blacklisted by the House Committee on Un-American Activities (HUAC) at the height of the anti-communist campaigns of 1947–52. Although she continued to work on Broadway in the 1950s, her blacklisting by the American film industry caused a precipitous decline in her income.  She was praised by many for refusing to answer questions by HUAC.

Hellman was romantically involved with fellow writer and political activist Dashiell Hammett, author of classic detective novels who also was blacklisted for 10 years until his death in 1961. The couple never married.  As a playwright, Hellman had many successes on Broadway, including Watch on the Rhine, The Autumn Garden, Toys In The Attic, Another Part of the Forest, The Children’s Hour, and The Little Foxes.

In her book Pentimento, a widely praised follow-up to her National Book Award-winning first volume of memoirs, An Unfinished Woman, the legendary playwright looks back at some of the people who, wittingly or unwittingly, exerted profound influence on her development as a woman and a writer. The portraits include Hellman’s recollection of a lifelong friendship that began in childhood, reminiscences that formed the basis of the Academy Award-winning film Julia.