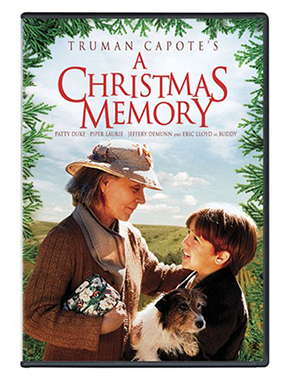 “A Christmas Memory”, a television film based on Truman Capote’s short story with the same title, is the second presentation in Ogunquit Performing Arts’ 16th annual Classic Film Series, to be shown on Sunday afternoon December 11, 2016, 2 pm at the Dunaway Center, 23 School Street in Ogunquit. Admission is free and there is plenty of free parking. Free popcorn, too.

Ogunquit Performing Arts continues the 16th season of the Classic Film Series Sunday, December 11, 2016 — 2 pm at the Dunaway Center, 23 School Street in Ogunquit with the showing of the 1997 film, ”A Christmas Memory.” The film will be shown on a full wall-size screen, admission is free, there is plenty of free parking, and popcorn is served, too! Come in from the December chill and be warmed by this gem of a story!

“A Christmas Memory” is a short story by Truman Capote.   First published in 1956, this much sought-after autobiographical recollection of Capote’s rural Alabama boyhood has become a modern-day classic.

This 1997 film version stars Patty Duke, Piper Laurie and Eric Lloyd.  As directed by Glenn Jordan, and adapted by Duane Poole, the gentle and lyrical holiday-themed drama begins when seven-year-old boy, Buddy (Eric Lloyd) is dropped off by his parents with distant relatives in an unfamiliar town one Christmas holiday.

Suddenly lonely and displaced, Buddy finds peace and solace in an unlikely cross-generational friendship with a sweet-natured old woman, Sook (Patty Duke). The two join forces and embark on a series of heartwarming adventures.   The evocative narrative focuses on country life, friendship, and the joy of giving during the Christmas season, and it also gently yet poignantly touches on loneliness and loss.

Originally published in ”Mademoiselle” magazine in December 1956, it was reprinted in The Selected Writings of Truman Capote in 1963. Random House issued it in a stand-alone hardcover edition in 1966, and it has been published in many editions and anthologies since.

Truman Capote was born Truman Streckfus Persons on September 30, 1924, in New Orleans, Louisiana. One of the 20th century’s most well known writers, Capote was as fascinating a character as those who appeared in his stories. His parents were an odd pair—a small-town girl named Lillie Mae and a charming schemer called Arch—and they largely neglected their son, often leaving him in the care of others. Capote spent much of his young life in the care of his mother’s relatives in Monroeville, Alabama.

He formed a fast bond with his mother’s distant relative, Nanny Rumbley Faulk, whom Truman called “Sook”. “Her face is remarkable – not unlike Lincoln’s, craggy like that, and tinted by sun and wind”, is how Capote described Sook in “A Christmas Memory.” In Monroeville, he was a neighbor and friend of author Harper Lee, (To Kill a Mockingbird) who is rumored to have based the character Dill on Capote.  Lee became his life-long friend, and later aided him during the four years he spent writing one of his signature books, In Cold Blood.