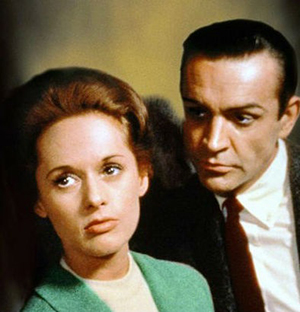 “Marnie”, starring Tippi Hedren and Sean Connery is the fourth presentation in Ogunquit Performing Arts’ 15th annual Classic Film Series will be shown on Sunday afternoon February 7, 2016, 2 pm at the Dunaway Center, 23 School Street in Ogunquit. Admission is free and there is plenty of free parking. Free popcorn, too.

The 1964 Alfred Hitchcock film “Marnie” is Ogunquit Performing Arts’ fourth presentation in the 15th season of the Classic Film Series Sunday February 7, 2016–2 pm at the Dunaway Center, 23 School Street in Ogunquit. The film will be shown on a full wall-size screen, admission is free, there is plenty of free parking, and popcorn is served, too.

The central plot of the film revolves around Marnie Edwards (Tippi Hedren), an habitual thief who goes to work for large corporations, steals from her bosses; then flees dying her hair, changing her name, and starting all over again. However, her new boss Mark Rutland (Sean Connery) recognizes her, pursues her, and finally marries her. Mark proves to be a bit unusual himself. Instead of reporting her to the police, he is intrigued by her criminal behavior, as well as her bizarre aversion to touch. He slowly discovers the events in her past that have caused her antisocial behavior. This in-depth character study of a truly unhappy woman and the just as pathological man who loves her is as riveting and fascinating as any film Hitchcock has produced in the past.

One additional character worth mention is Marnie’s mother, a disabled Bible-quoting obsessive played with panache by Louise Latham.

“Marnie” was released in 1964 and is considered one of Alfred Hitchcock’s masterpieces. Soon after its introduction it was highly underrated and misunderstood as is it not a straightforward narrative dealing as it does with the compulsive and obsessive nature of the two main characters Tippi Hedren and Sean Connery. Some decades later it was rediscovered and impressed former critics with the fact that it deals with such issues as Freudian psychoanalysis, sexual abuse, gender roles, trauma, etc. Throughout the film, there is brilliant use of color, and some memorably dreamlike shots.

Don’t miss this intriguing Hitchcock film, “Marnie” to be shown at the Dunaway Center, 23 School Street in Ogunquit on Sunday afternoon February 7, 2016 at 2 pm. A good way to relax after a hectic holiday season. The film is shown on a full wall-size screen, admission is free, and popcorn is served!