The film is a performance of Benjamin Britten’s grand opera masterpiece, with huge orchestra and chorus, starring Jon Vickers as the eccentric fisherman persecuted by his village, and filmed in London’s Royal Opera House at Covent Garden.

Peter Grimes is the work that established Benjamin Britten as a major musical force when it was first performed in 1945.  It is now universally acknowledged as one of the twentieth century’s finest operas.  In this performance, world-great tenor Jon Vickers – internationally acclaimed for his portrayal of Grimes – heads a cast that gives vivid life to this powerful masterpiece.  The performance is conducted by Colin Davis. 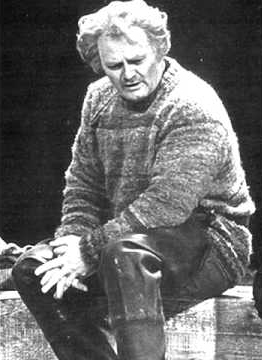 Peter Grimes was based on the narrative poem, “Peter Grimes” in George Crabbe’s book The Borough, with libretto adapted by Montagu Slater. The tragic story revolves around the tormented title character, a fisherman who finds himself shunned by the rest of the fishing village, called the Borough.   At once the protagonist and the anti-hero, Grimes is gruff and unpopular, but the character is crafted with a certain degree of ambiguity.

His former apprentice died at sea, and although Grimes was cleared of any wrongdoing, the village still believes that he was responsible and are ever suspicious of him.  A tragic series of further events, fanning the flames of local gossip, convince the Borough that Grimes is a murderer.  They condemn and pursue him; he descends into madness as the mob approaches.

Despite the huge choral scenes and many supporting roles, the opera still retains total focus on the title character.  Grimes is a lonely fisherman, reclusive, bitter, but determined to improve his standing in the disapproving village.  His brutish, menacing persona is a response to the overwhelming mob behaviour of the villagers, but beneath it lies a desperately wounded man.

Underlying the entire tragedy are the ceaseless sounds of the sea, as magnificently depicted in the orchestral score.  They are showcased in the incredible orchestral interludes between scenes (music that is frequently heard in concert halls as the “4 Sea Interludes”).   But the moods of the ocean, its storms, its tides, and its constant, uneasy motion, are the musical base of the entire opera, against which the emotional themes of the characters and chorus contend… just as the village itself finds both daily sustenance and danger in life by the sea.

Join us for this powerful musical experience on Sunday, January 7, 2018 at 2 pm.   Peter Grimes is shown on a full wall-size screen, admission is free, and refreshments are served!

Sunday, April 1: “A Place in the Sun” with Elizabeth Taylor, Montgomery Clift