The Classic Film “A Child’s Christmas in Wales” 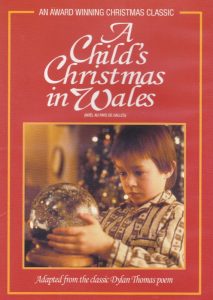 A Child’s Christmas in Wales, the second presentation in Ogunquit Performing Arts’ 15th annual Classic Film Series will be shown on Saturday afternoon December 5, 2015, 2 pm at the Dunaway Center, 23 School Street in Ogunquit. Admission is free and there is plenty of free parking. Bring the whole family!

Ogunquit Performing Arts continues the 15th season of the Classic Film Series Saturday December 5–2 pm at the Dunaway Center, 23 School Street in Ogunquit with the showing of the timeless Classic: A Child’s Christmas in Wales. The film will be shown on a full wall-size screen, admission is free, there is plenty of free parking, and popcorn is served, too! What better way for the whole family to spend a winter Saturday afternoon?

The beautiful poem of the same name by Dylan Thomas is the basis for A Child’s Christmas in Wales, the words brought to life by director Don McBrearty. The setting is an ocean village in the country of Wales. The actors, costumes, and sets create a homey aura that makes you feel like you are right in the cottage with young Thomas (Jesse McBrearty) and his grandfather played by the British actor Denholm Elliott.

It’s Christmas Eve and Thomas is excited about the holiday. His only problem is that it is raining instead of snowing. To make him feel better, grandfather gives him an early present of an old snow globe as he tells him colorful and amusing stories of Christmases of his childhood that are shown in flashback with warmth and humor. Who in the audience can’t relate to food-stuffed relatives sitting in the living room around the fire after dinner and aunts in the kitchen washing the dishes?

Thomas keeps asking his grandfather questions because he likes the stories and because he doesn’t want to go to bed. In the last story he hears before going to sleep, grandfather tells about going to bed on Christmas night and listening to his family singing carols downstairs.

A Child’s Christmas in Wales takes you on a lyrical journey into the heart of an old man. A journey back to the magic of boyhood where no two moments were ever alike and life was embraced with belief instead of doubt. On this special Christmas eve, old Geraint shares these heart-warming moments with his dearly-loved grandson, Thomas. In one evening he does more than recall his cherished childhood . . . he relives it.

Bring the whole family to the Dunaway Center, 23 School Street in Ogunquit on Saturday afternoon December 5 at 2 pm and start the Christmas season by enjoying the touching story of a Child’s Christmas in Wales. The film is shown on a full wall-size screen, admission is free, and popcorn is served!