“The African Queen” is the first film in Ogunquit Performing Arts’ 18th Annual Classic Film Series Sunday, November 4, 2018 at 2 pm at the Dunaway Center Admission, Parking and Popcorn are free! 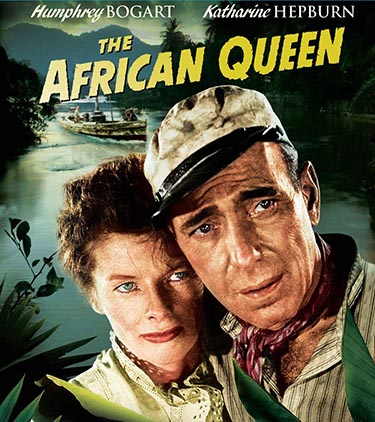 Ogunquit Performing Arts presents the first film it its 2018-2019 Classic Film Series on Sunday, November 4, 2018, at 2 pm in the Dunaway Center, with the screening of the John Huston film, ” The African Queen.”  The enduring  adventure film starring Katharine Hepburn and Humphrey Bogart will be shown on a wall-sized screen, with free admission, parking and popcorn.

This 1951 film by director John Huston, based on the 1935 novel of the same name by C. S. Forester, is one of the classics of Hollywood adventure filmmaking, with comedy and romance besides. It was the first color film for the two leads and for director Huston.

The acting of the two principal actors – Humphrey Bogart and Katharine Hepburn – is some of the strongest ever registered on film, although this was their first and only pairing together. They portray an unshaven, drinking and smoking captain of a cranky tramp steamer, and a prissy and proper, but imperious and unorthodox missionary spinster.

In September 1914, news reaches a British Methodist mission in German Eastern Africa that Germany is at war with England,  so Reverend Samuel Sayer (Robert Morley) is now considered a hostile foreigner. German imperial troops burn down his mission; he is beaten and dies of fever. His well-educated, fastidious sister Rose Sayer (Hepburn) buries him and leaves by the only available transport, the dilapidated river steamboat ‘African Queen’, owned and captained by the equally dilapidated Charlie Allnut (Bogart).

Having cast Hepburn in the film, producer Sam Spiegel came out to visit her, and the two discussed the project and potential actors to play opposite her. Charlie Allnut was supposed to have a Cockney accent, which limited their choices until Spiegel suggested Humphrey Bogart. They both thought him perfect for the part and simply decided to make his character Canadian, which would solve the problem of the Cockney accent. As Katharine Hepburn later wrote in her 1987 book The Making of the African Queen, “Now, looking back at that conversation – can you imagine anyone but Bogie playing that part? He was really it – hook, line and sinker”.

Much of the film was shot on location in Uganda and the Congo in Africa. This was rather novel for the time, especially for a technicolor picture which utilized large unwieldy cameras. The cast and crew endured sickness, and spartan living conditions during their time on location. In one scene, Hepburn was playing a pump organ but had a bucket nearby because she was often sick between takes. Bogart later bragged that he and Huston were the only ones to escape illness, due to their fortifying themselves from the large supply of whiskey they had brought along.

“The African Queen” was a big box office and critical success, honored with four Academy Award nominations for Best Actor, Actress, Director and Screenplay. It also provided a major career boost for the director and his two stars. Humphrey Bogart achieved a major triumph with his role as Charlie Allnut, winning his only Academy Award as Best Actor for his performance.

Don’t miss this entertaining film, “The African Queen”, on Sunday, November 4, 2018, at 2 pm at the Dunaway Center, 23 School Street in Ogunquit.   The film is shown on a full wall-size screen; admission, parking, and popcorn are free!