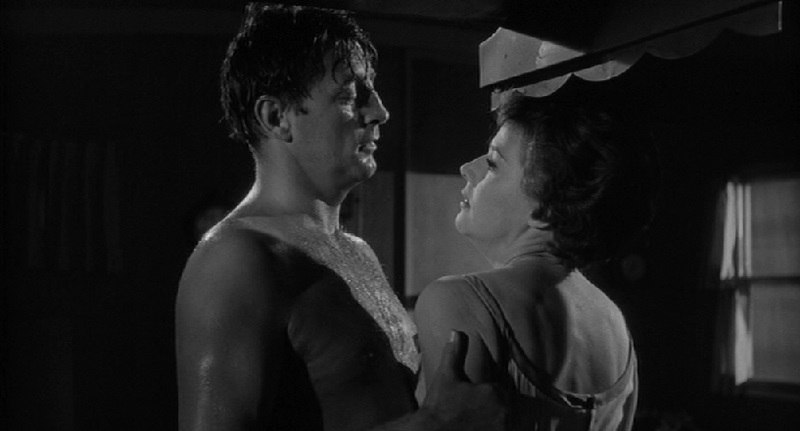 Robert Mitchum threatens Polly Bergen in a scene from the stalker thriller “Cape Fear”, to be screened on Sunday, March 3, 2019 at 2 pm, at the Dunaway Center, 23 School Street, Ogunquit. Presented by Ogunquit Performing Arts with free admission, parking and popcorn.

Robert Mitchum delivers the most frightening performance of his career in his portrayel of Max Cady, a convicted sex offender and psychopath who is released from prison and sets out to torture and ultimately murder attorney Sam Bowden (Gregory Peck), who was the chief witness against him in his trial and whom he holds responsible for his conviction.
Mitchum brings a brutal, menacing intensity to his chilling performance as he relentlessly stalks Bowden’s family. A scene where Mitchum attacks Polly Bergen’s character on a houseboat was alleged to be somewhat improvised. Before the scene was filmed, director J. Lee Thompson told a crew member to bring a dish of uncooked eggs to the set. Mitchum’s cracking and rubbing the raw eggs on Bergen was not scripted and Bergen’s reactions were presumably real. While filming the scene, Mitchum cut open his hand but kept going, smearing blood over Bergen’s back.
Gregory Peck deserves the credit for casting Mitchum as Max Cady and taking the more low-key role of attorney Sam Bowden. After buying the rights to the John D. MacDonald novel, The Executioners, Peck brought together a production team which had served him well in the past. He and Thompson coaxed, pushed, and persuaded a reluctant Mitchum to take on the Cady role.
Thompson had always envisioned the film in black and white prior to production. As an Alfred Hitchcock fan, he wanted to have Hitchcockian elements in the film, such as unusual lighting angles, an eerie musical score, closeups, and subtle hints, rather than graphic depictions of the violence Cady has in mind for the family.
“Cape Fear” was a cause for concern for the Production Code Administration, which still needed to be reckoned with in the 1960’s. After reviewing the film, the Administration sought to remove several shots and references. British censors demanded 161 cuts; “Cape Fear” was finally released there minus six minutes of footage.
Because of the film’s disturbing nature, critical reviews were mixed. Yet, the film’s claustrophobic sense of impending terror and Mitchum’s mesmerizing performance are unsurpassed; fine acting triumphed over excessive graphic violence, and the film is now recognized as a psychological thriller masterpiece, eclipsing even the 1991 remake by Martin Scorsese.
So, bring a friend to hold your hand and join us for this terrific, fearful film! “Cape Fear” will be screened on Sunday, March 3, 2019, at 2 pm at the Dunaway Center, 23 School Street in Ogunquit. The film is shown on a full wall-size screen; admission, parking, and popcorn are free!
FMI: www.ogunquitperformingarts.org