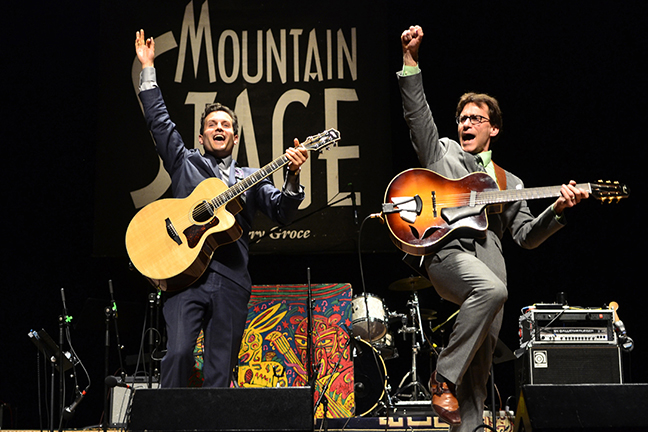 Thrilling jazz guitar virtuosos Frank Vignola and Vinny Raniolo will perform on Friday, September 9, 2016, at 8:00 pm in the Dunaway Center, 23 School Street in Ogunquit, presented by Ogunquit Performing Arts as part of the Capriccio Arts Festival.

As a part of the Capriccio Festival of the Arts, Ogunquit Performing Arts is elated to bring to Ogunquit the show-stopping talents of virtuoso jazz guitarists Frank Vignola and Vinny Raniolo on Friday, September 9, 2016, at 8:00 pm at the Dunaway Center, 23 School Street, Ogunquit.  These exciting performers have received international acclaim for their thrilling performances before cheering audiences.

Frank Vignola is one of the most extraordinary guitarists performing before the public today. His stunning virtuosity has made him the guitarist of choice for many of the world’s top musicians, including Ringo Starr, Madonna, Donald Fagen, Wynton Marsalis, Tommy Emmanuel, the Boston Pops, the New York Pops, and guitar legend Les Paul, who named Vignola to his “Five Most Admired Guitarists List” for the Wall Street Journal. Vignola’s jaw dropping technique explains why the New York Times deemed him “one of the brightest stars of the guitar”.

With over 1000 engagements in the last 5 years alone, Frank has become one of the most popular and sought after guitarists on the international music scene.  His dynamic genre-spanning music has brought him to 14 countries on 3 continents.  He is often featured on National Public Radio, and appears frequently on Public Television as well.

“For me, the standout musician in the ensemble was guitarist Frank Vignola, who can play more musically at ridiculous tempos than just about anyone I’ve heard.  Vignola had the crowd in the palm of his hand for every solo.”  The Jazz Session Jason Crane, Tanglewood Jazz Festival.

In addition to multiple CD albums, Frank has written over 18 music books, produced 8 full length video courses, and conducts master classes and workshops at music universities around the world, including Juilliard and Boston University.

Vinny Raniolo is best known for his accompanying skills and is a very high demand rhythm guitarist. His dynamic playing with Frank Vignola has taken him to some of the world’s most illustrious venues, including the Sydney Opera House in Australia, the Palace of Fine Arts in San Francisco, New York’s Lincoln Center, and the world’s oldest indoor concert hall, Teatro Olimpico in Vicenza, Italy.

Often performing on National Public Radio in duo with Frank Vignola, Vinny has become a familiar figure on Public Television, featured previously on three popular shows, including the heavily programmed Tommy Emmanuel and Friends. Frank and Vinny’s own PBS special, Four Generations of Guitars premiered in the 2014-15 season as part of the 13 episode series Music Gone Public.  Vinny also has worked with artists like Leon Redbone, Vince Giordano, Deana Martin and Olli Soikkeli as well as on screen appearances on HBO’s Boardwalk Empire.

He is dedicated to his career as a professional touring musician, studio musician, educator, and arranger. Vinny has been on numerous recordings with Bucky Pizzarelli, Tommy Emmanuel, Tony Trishka, Matt Flinner, Ken Peplowski to name a few. Vinny is also an experienced educator and has taught classes at Bowling Green University, Kent State University, Asiago Music Conservatory, and others.

TICKETS for this performance are $18 in advance; $20 at the door; $5 student, and may be purchased online at www.ogunquitperformingarts.org.  Tickets are also available at the Dunaway Center, Ogunquit Camera Shop, Ogunquit Welcome Center, and Ogunquit Playhouse Downtown Box Office until 24 hours prior to the concert.

Join Ogunquit Performing Arts on Friday, September 9, 2016, at 8:00 pm at the Dunaway Center, 23 School Street in Ogunquit, for this electrifying evening of virtuoso jazz with Frank Vignola and Vinny Raniolo.  It is not to be missed!