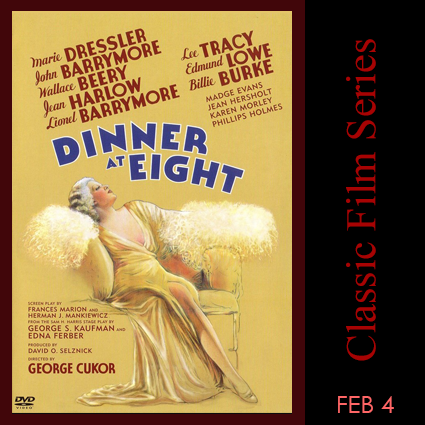 The fourth film in Ogunquit Performing Arts’ Classic Film Series is the 1934 elegant, ensemble comedy, “Dinner at Eight“, directed by George Cukor, and with an all-star MGM cast, including Jean Harlow, Marie Dressler, John Barrymore, Wallace Beery, Lionel Barrymore and Billie Burke.  The film will be screened on Sunday, February 4, 2018 at 2:00 pm at the Dunaway Center, 23 School Street in Ogunquit.  Admission, parking and popcorn are free.

The MGM film was based on the popular, dialogue-rich Broadway hit by George S. Kaufman and Edna Ferber, that was originally produced on the stage by Sam H. Harris. The witty romantic comedy is filled with choice lines of dialogue, and revolves around various relationships between the characters.  It is a fast-moving narrative with its humor and tragedy, one that offers a great variety of characterizations.

“Dinner at Eight” combines delightful comedy and simultaneous poignancy, as the dinner hosts and guests unknowingly bring together their various intentions, personal agendas, and devastating problems.  The course of the dinner party does not run smooth for the beleaguered hostess,  and there is an underlying tense awareness that literally anything can happen!

The status-conscious but oblivious Millicent Jordan (Billie Burke) is throwing a chic dinner party.  She is unaware that her husband (Lionel Barrymore) is suffering from serious health problems plus the realization that his business, which has been hard-hit by the Depression, is about to collapse.  Millicent’s shaky but elite guest list includes a wealthy but coarse tycoon Dan Packard (Wallace Beery) and his brassy wife Kitty (Jean Harlow), her husband’s ex-lover and former stage beauty Carlotta Vance (Marie Dressler), and a desperate, washed-up movie star (John Barrymore) who is secretly carrying on an affair with their young daughter (Madge Evans), despite her engagement to another man.

The producer is David O. Selznick, with a script by Frances Marion, Donald Ogden Stewart, and Herman Mankiewicz.  “Dinner at Eight” was the first film that Selznick made at MGM,  having worked successfully with George Cukor at his previous studio, RKO.  With the success of the film, Selznick established himself at MGM as a top producer.

“Dinner at Eight” was not the glamorous Jean Harlow’s first film, but it was the movie that proved not only did she have what it took to be a major movie star, but also that she could act and hold her own in the midst of established professionals like John Barrymore.

Actress Billie Burke’s famous onscreen persona as a flighty airhead also can be traced back to this film. Millicent Jordan represented Burke’s first role as a mature woman, and she was so perfect as the distraught hostess that she was identified with that type of character ever after.

Marie Dressler, a tremendous, if unlikely, star in her day, was cast totally against type as a former great beauty, actress, and now society woman of considerable means. The casting choice turned out to be inspired,  however, as Dressler’s talent and abilities are so considerable, and her way with a great line so effective,  that she all but steals the show.

Join us for this hilarious film on Sunday, February 4, 2018 at 2 pm.   “Dinner at Eight “ is shown on a full wall-size screen, admission, parking, and popcorn are free!

Sunday, April 8: “A Place in the Sun” with Elizabeth Taylor, Montgomery Clift