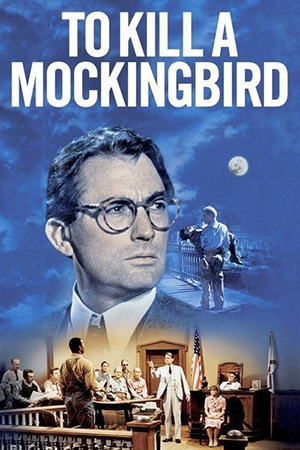 Ogunquit Performing Arts begins the 15th season of the Classic Film Series Sunday November 1, 2 pm at the Dunaway Center, 23 School Street in Ogunquit with the showing of the 1962 American drama film, To Kill A Mockingbird, often considered to be one of the greatest films ever made. The film will be shown on a full wall-size screen, admission is free, there is plenty of free parking, and popcorn is served, too! What better way to spend a winter Sunday afternoon?

To Kill A Mockingbird was directed by Robert Mulligan. The screenplay by Horton Foote is based on the 1960 prize-winning autobiographical novel of the same name written by Harper Lee. The film is set in a small Alabama town in the Depression-era South in the 1930s. Lawyer Attics Finch (Gregory Peck) defends a black man against an undeserved rape charge, and his kids against prejudice. Finch is a scrupulously honest and highly respected lawyer, a role Gregory Peck interprets to perfection. The trial and surrounding events are seen through the eyes of Finch’s six-year-old daughter Scout (Mary Badham.) To Kill A Mockingbird carries its audience on an odyssey through the fires of prejudice and injustice in 1932 Alabama, This process exposes Scout and her brother Jem to the evils of racism and stereotyping,

To Kill a Mockingbird was a huge box office success, earning more than 10 times its budget and an overwhelmingly positive response from critics. It won three Academy Awards, including Best Actor for Peck, and was nominated for a total of eight. Previous to being turned into a film, the book had been translated into more than 40 languages, sold more than 30 million copies worldwide, and was voted one of the best novels of the 20th century by U.S. librarians.

Ogunquit Performing Arts opens the popular Classic Film Series Sunday November 1 at 2 pm with the showing of To Kill A Mockingbird. The film will be shown on a full wall-size screen at the Dunaway Center, 23 School Street right next to the fire station in Ogunquit. There is plenty of free parking. Admission is free and there will be popcorn for all.