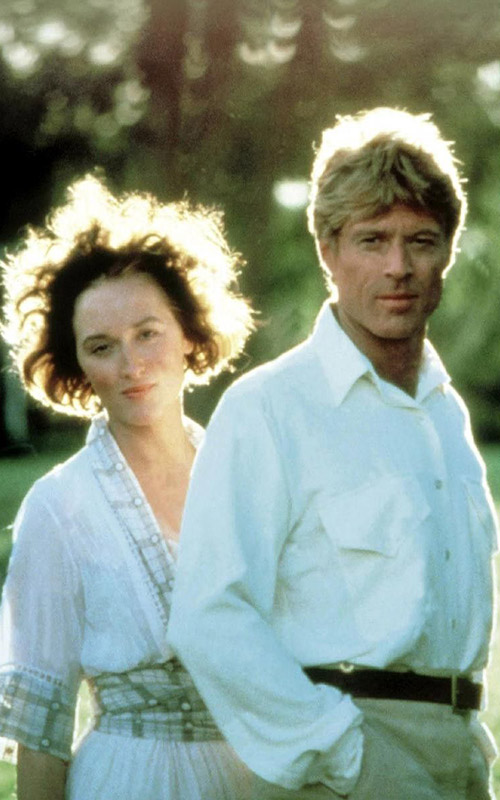 Meryl Streep and Robert Redford star in the sweeping romantic drama, “Out of Africa,” filmed on location in East Africa. This 1985 American epic romantic drama film, directed and produced by Sydney Pollack, won the Academy Award for Best Picture, plus 6 additional awards – including Best Cinematography for capturing the breathtaking beauty and expanse of the Kenyan wilderness.

The film will be shown on Sunday, March 1st, 2020 at 2 pm on a full wall-size screen at the Dunaway Center, 23 School Street in Ogunquit. Admission, parking, and popcorn are free.

The film tells the autobiographical tale of the Danish writer Karen Blixen, (Meryl Streep,) and her time spent on a coffee plantation in East Africa in the early twentieth century. Blixen, in the film, marries Swedish Baron Bror Blixen-Finecke (Klaus Maria Brandauer) and moves with him to Africa. The marriage is an unhappy one, as he is a womanizer who eventually leaves her to take care of the plantation on her own. The Baroness meets a hunter/adventurer (Robert Redford), and the two begin an idyllic love affair.

The film is based loosely on the autobiographical book Out of Africa written by Isak Dinesen (Karen’s pen name), which was published in 1937, with additional material from her book Shadows on the Grass and other sources. The book was adapted into a screenplay by the writer Kurt Luedtke, and filmed in 1984.

The idea of adapting the Dinesen’s memoirs to the screen had been thrown around for decades before the project was finally picked up by Universal Studios. Orson Welles and David Lean had both considered making the film, but Universal ultimately gave the project to Sydney Pollack to produce the film in the 1980s, along with directing it.

“Out of Africa” was filmed on location in Africa using descendants of several people of the Kikuyu tribe who are named in the book, including the grandson of chief Kinyanjui who played his own grandfather. Much of it was filmed in the Langata area near the actual Ngong Hills outside Nairobi.

Streep and Pollack often clashed during the 6-month shoot in Kenya, particularly over Blixen’s voice. Streep had spent much time listening to tapes of Blixen, and began speaking in an old-fashioned and aristocratic fashion, which Pollack thought excessive. However, Streep credited Pollack with protecting the actors from all the enormous logistical difficulties, and said she found making the film a magical experience.

The production was not without its share of problems. The country was in the middle of a drought during filming, and the crew had to consider moving to a different location; the rains came just as they were attempting to decide where to relocate. Many crew members contracted malaria, and filming animals in the bush posed its own special problems. It is illegal to touch or maneuver wild animals, so the crew had to camp out for hours while they waited for the animals to come into just the right spot for each shot.

Please join us for this epic romance on Sunday afternoon, March 1st, at 2 pm at the Dunaway Center, 23 School Street, in Ogunquit. The film is shown on a full wall-size screen; admission, parking, and popcorn are free.
FMI: www.ogunquitperformingarts.org