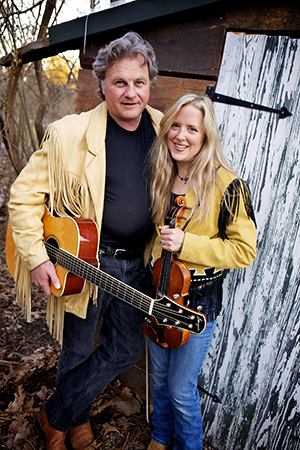 Harvey Reid, Joyce Andersen, and the Knotty Pine Boys All-Star band will be performing a program of country music, “Sing Me Back Home: 100 Years of Country Duets,” Friday May 20, 2016, 8 pm at the Dunaway Center, 23 School Street in Ogunquit.

Ogunquit Performing Arts invites you to an evening of classic country music on Friday May 20, 8 pm at the Dunaway Center, 23 School Street in Ogunquit featuring talented local artists Joyce Andersen and Harvey Reid and the Knotty Pine Boys All-Star Band.   Just when you were wondering what happened to the country music that you loved and remembered, these talented musicians will feature it in a spectacular evening of those old-time favorites: country, bluegrass, folk, blues, Celtic, and ragtime.

Harvey Reid and Joyce Andersen are life-long musicians with deep roots in a wide range of American music. Between them they have made over 30 albums including folk & blues, country & Americana, and jazz & bluegrass. They have traveled the country and the world playing their original takes on American music as well as their own songs. For this performance, they are joined by members of the Knotty Pine Boys playing steel guitar, bass, and drums, a recent combination which has packed in the crowds in local venues.

Joyce Andersen is a veteran musician who has enjoyed a varied 20-year career as side-gal, session player, singer-songwriter, and band leader. Her live shows and recordings showcase her versatility as a vocalist and violinist who thrives on writing and interpreting songs across many genres from old-time, rock & Americana, to folk, pop, & swing. She started getting critical acclaim and radio play in the folk world with her first full length CD “The Girl I Left Behind” (2000) for its songwriting, breadth of styles and her unique ability to harmonize her vocals with her violin.

Harvey Reid was born in California, and currently resides in southern Maine with his family. He is best known for his solo acoustic fingerstyle guitar work, but he is also a skilled flatpicker and autoharp player who performs and records with dobro, mandolin, mandocello, bouzouki and six-string banjo. Reid is married to New Hampshire-born fiddler/singer/songwriter Joyce Andersen, and they have two children. He has been a full-time musician since 1976, and has released 25 recordings on the Woodpecker label containing nearly 500 tracks of original, traditional and contemporary acoustic music. Reid won the 1981 National Fingerpicking Guitar competition and the 1982 International Autoharp contest and has performed over 6000 concerts in most of the 50 states and a number of countries in Europe.

When Joyce Andersen and Harvey Reid get together with the Knotty Pine Boys, a collection of all-star side-men, their love for music is infectious and the evening of music is one not to be missed. They dress in Western clothing and play hits from the golden era of country music: songs from Merl Haggard, Patsy Cline, George Jones, Tammy Wynette, Hank Williams, Dolly Parton and more.

Join Ogunquit Performing Arts Friday evening May 20, 2016 at 8 pm at the Dunaway Center, 23 School Street in Ogunquit for a very special evening of old-fashioned country music, “Sing Me Back Home: 100 Years of Country Duets” by Joyce Andersen, Harvey Reid, and the Knotty Pine Boys.

Tickets are $15 advance, $18 at the door, and $5 student. Tickets may be purchased at the Dunaway Center, Ogunquit Camera Shop, Ogunquit Welcome Center, and Playhouse Downtown Box Office. Tickets are also available on line at www.ogunquitperformingarts.org, a secure ticket system.