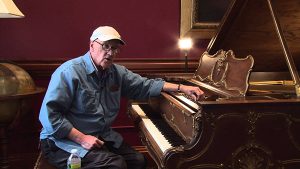 Eminent composer and conductor John Heiss plans to attend the performance of Boston Chamber Music on Friday June 5th, at 8:00 pm, at the Dunaway Center, 23 School Street in Ogunquit. The concert is the opening event of the 21st Annual Chamber Music Festival presented by Ogunquit Performing Arts.

The Boston Chamber Music ensemble currently consists of musicians from the Boston Philharmonic and Boston Chamber Music Society, each of whom credits Professor Heiss as their mentor, and is appreciative and delighted at the prospect of his presence in their audience. They will perform one of his compositions, “Five Songs from James Joyce” during their program.

Heiss is known by more titles than just “Professor” however. Around NEC (New England Conservatory), he is affectionately referenced as the “Pitch Doctor”. That title has a history reaching even further back in his career – during his time as a Master’s student at Princeton, in fact. With perfect pitch and a deep knowledge and appreciation for Igor Stravinsky’s work, Heiss was called in to rehearsals of the composer’s Variations for Orchestra and Requiem. His job? To listen to the performance and catch wrong notes and mistakes in the copied-out parts. It was Stravinsky himself who coined the title, as Heiss recounted during a recent video interview at NEC.

And, Heiss is ever full of surprises. During a wind quintet coaching at NEC, the group discussed an upcoming celebration for their horn player while Heiss sat down at the piano. He began a piece thick with pitch material, rich and dense, what they presumed to be one of his compositions. Gradually the piece spread out across the keys, evolving into a jazzy and increasingly recognizable tune, and eventually ending on a single note.

What was this mysterious piece?

Why, it was “Happy Birthday,” of course.

“In preparation for our coaching with John Heiss, our woodwind quintet went through the motions—finding stands, arranging music, tuning, etc. As we sounded our first A and prepared to launch into the Nielsen quintet, Professor Heiss already had his hand up. “Stop,” he said. “Are you really listening?” With his help and ten minutes of detailed over­tone work, we finally settled into a comfortable group sound. This is why we (like so many other students at NEC) were so excited to work with Heiss—he possesses a magical ear and a passion for music that creates curiosity in his students and helps them realize their fullest musi­cal potential.”

Spurred by a deep curiosity and passion for learning, Heiss decided to learn all of the instruments in high school (“My flute teacher told me I had to quit playing brass instruments, though!” he adds with a smile). Included among the many hats (besides his trusty baseball cap!) he has worn: composer, conductor, flutist, saxophone player, jazz band leader, pianist, and Dixieland clarinetist. Heiss has written 51 compositions (of which 35 have been published and 20 recorded). He also founded Boston Musica Viva and subbed with the BSO (he fondly recalls a performance of Stravinsky’s Sympho­ny of Psalms.) At NEC, he serves as director of the contemporary ensemble and teaches theory, music history, composition, flute, and chamber music. To most, this might seem like an over­whelming workload, but Heiss insists, “Nothing is unrelated!” He enjoys “try­ing to convey what music is about and being with people that understand it.” As to his students, Heiss stated “…it is frankly unbelievable how good the students are and how much they care.” Those students, he says, are the reason he loves coming to work. “I enjoy teaching people who want to learn and have the capacity to play at a high, high level.”

Heiss is a walking testament to the history and growth of New England Conservatory. He recalls composer residencies with great detail, par­ticularly Messaien (“He showed up in secret, listened to a student group rehearse his piece, and made a few suggestions. When they asked who he was, he told them he was Messaien”) and Ligeti (“Ligeti agreed to come under several conditions- we were not to pay him, we couldn’t tell his agent, and he wanted to be with the students.”).

He has received awards and commissions from the National Institute of Arts and Letters, Fromm Foundation, NEA, Rockefeller Foundation, Massachusetts Council on the Arts and Humanities, ASCAP, and the Guggenheim Foundation. His principal publishers are Boosey & Hawkes, E.C. Schirmer, and Elkus & Son.

Ogunquit Performing Arts invites you to meet John Heiss and hear one of his compositions played at the Boston Chamber Music performance on Friday June 5—8 pm at the Dunaway Center, 23 School Street in Ogunquit. Boston Chamber Music is the opening event for the 21st annual Chamber Music Festival. Tickets are $15 advance, $18 at the door, and $5 student.