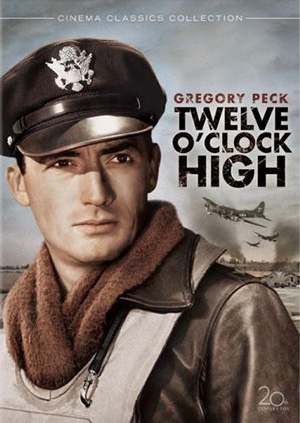 Ogunquit Performing Arts’ sixth presentation in the 15th season of the Classic Film Series, “Twelve 0’Clock High,” will be shown Sunday April 3, 2016–2 pm at the Dunaway Center, 23 School Street in Ogunquit. The film, starring Gregory Peck and featuring Hugh Marlowe, Gary Merrilll, Millard Mitchell and Dean Jagger, will be shown on a full wall-size screen, admission is free, there is plenty of free parking, and popcorn is served, too!

The wartime memories of surviving World War II bomber squadrons were still clear in the minds of their crews when “Twelve O’Clock High” was released in 1949. The film follows the aircrews in the U.S. Army’s Eighth Air Force who flew the daylight bombings against Nazi Germany and occupied France during the early days of the United States’ involvement in World War II.

The film is based on a novel by veteran screenwriters Sy Bartlett and Beirne Lay Jr. who drew on their own wartime experience with the Eighth Air Force Bomber Units. They witnessed firsthand the effects of fatigue and trauma as their commanders sent fliers on deadly mission after mission. They adapted the book to the screen themselves.

The story is told as a flashback account of wartime valor and teamwork. The film stars Gregory Peck (Frank Savage) in one of his finest performances as a young general who assumes command of a “hard luck” bomber group squadron based in England. At first, General Savage has little rapport with the 918th Bomber Group whose loyalties still belong to their previous commander. As they continue to fly dangerous missions over Germany, the group and their new leader develop mutual respect and admiration. The general elevates the group from a bleak combat record and low morale, to a peak of aggressiveness and pride, by pushing the limits of “maximum effort” and human endurance.

“Twelve O’Clock High” was directed by Henry King and produced by Darryl F. Zanuck. It marked a turning away from the optimistic, morale-boosting style of wartime films and toward a grittier realism that dealt more directly with the human costs of war.

The film was nominated for four Academy Awards and won two: Dean Jagger for Best Actor in a Supporting Role, and Thomas T. Moulton for Best Sound Recording. Gregory Peck won his fourth Oscar nomination for Best Actor. In 1998, Twelve O’Clock High was selected for preservation in the United States National Film Registry by the Library of Congress as being “culturally, historically, or aesthetically significant.”

Don’t miss this vivid and engrossing film, “Twelve O’Clock High,” at the Dunaway Center, 23 School Street in Ogunquit on Sunday April 3, 2016 at 2 pm.

As all good things must come to an end, be sure to mark your calendars for the final Classic Film showing: