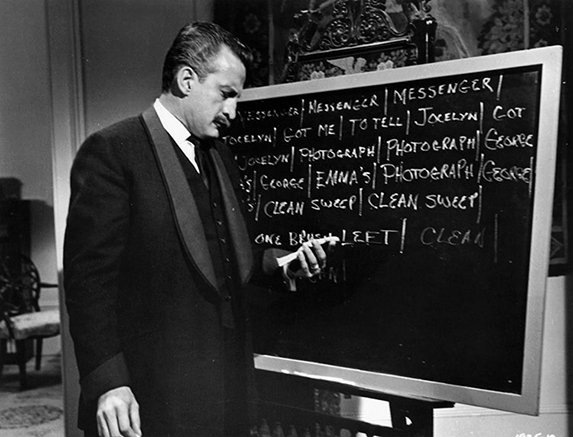 George C. Scott studies “The List of Adrian Messenger”, the fifth presentation in Ogunquit Performing Arts’ 15th annual Classic Film Series, to be shown on Sunday afternoon March 6, 2016, 2 pm at the Dunaway Center, 23 School Street in Ogunquit. Admission is free and there is plenty of free parking. Free popcorn, too

Ogunquit Performing Arts continues the 15th season of the Classic Film Series Sunday March 6, 2016 – 2pm with the showing of John Huston’s 1963 crime mystery, “The List of Adrian Messenger” at the Dunaway Center, 23 School Street, Ogunquit. Admission and parking are free. Free popcorn, too.

The 1963 crime mystery, “The List of Adrian Messenger” is Ogunquit Performing Arts’ fifth presentation in the 15th season of the Classic Film Series Sunday March 6, 2016–2 pm at the Dunaway Center, 23 School Street in Ogunquit. The film will be shown on a full wall-size screen, admission is free, there is plenty of free parking, and popcorn is served, too! “The List of Adrian Messenger” is a 1963 black and white crime thriller about a retired British intelligence officer (George C. Scott) investigating a series of apparently unrelated deaths. Set in the fog-enshrouded streets and country estates of England, it was directed by John Huston from a screenplay by Anthony Veiller, based on the 1959 novel of the same title by Philip MacDonald. It’s a movie filled with fantastic stars, but some of them are hard to recognize because they have disguised themselves.   It’s the audience’s challenge to find Tony Curtis, Burt Lancaster, Robert Mitchum and Frank Sinatra. The lead characters are played by George C. Scott, Kirk Douglas, and Dana Wynter. The film also features Jacques Roux, Herbert Marshall, Clive Brook, and Gladys Cooper.

The story begins simply enough with Anthony Gethryn (George C. Scott), a retired MI5 officer visiting his good friend Adrian Messenger (John Merivale).   After tea Messenger asks his friend to look into the backgrounds of the ten people on a list he has made as he suspects that these seemingly unrelated accidental deaths might be connected. Messenger is rather secretive about it and what he wants to learn, but Gethryn agrees. The plot thickens shortly thereafter when Messenger is killed in a plane which explodes in midair. As Gethryn adds Messenger’s name to the list and begins to investigate, he suspects that there is a mastermind behind the accidents.

Who was the killer? To find out, come to the Dunaway Center, 23 School Street in Ogunquit on Sunday March 6, 2016 at 2 pm and follow Gethryn’s travels as he searches for the solution to “The List of Adrian Messenger.”

Mark your calendars for the upcoming Classic Film showings: